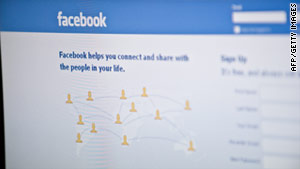 "The Defendant admitted that she was on Facebook playing a game called Cafe World, checking on friend's status and sharing videos, in the living room, while [the infant] was in the bathtub," according to the affidavit.
STORY HIGHLIGHTS
RELATED TOPICS

(CNN) -- A Colorado woman told authorities she was using Facebook in another room when her infant son drowned in a bathtub, according to an arrest affidavit.

If convicted, the Fort Lupton resident could face a sentence of 16 to 48 years, Finch said.

According to the Weld County Sheriff's Office affidavit, the child died on September 20, 2010. The infant, not named in the affidavit, was 13 months old, according to CNN affiliate KUSA. The autopsy listed anoxic brain injury, cardiac arrest and drowning as the cause of death.

Johnson said she put the child in the tub in the morning after he ate and played, according to the affidavit. The water was a little higher than normal, it added.

Court documents indicate the infant had been treated for a seizure about a month before his death.

"The Defendant admitted that she was on Facebook playing a game called Cafe World, checking on friends' status and sharing videos, in the living room, while [the infant] was in the bathtub," according to the affidavit.

The woman checked on the infant once and found him playing. After about three more minutes, "she didn't hear [the boy] playing, she went in to check on him and saw him sideways with his face in the water," the affidavit states.

The boy was later airlifted to a hospital, where he was pronounced dead, according to authorities.

Johnson told investigators that starting two weeks before the incident, she would leave the boy alone in the tub, according to the affidavit. Asked why, she said "she started doing this when he really wanted to be left alone; he was a very independent baby. She also said she knew what it was like to be told no, she didn't want her baby to be told no and didn't want him to be known as a mama's boy."

She acknowledged leaving the infant alone "was so stupid," according to the affidavit.

Johnson's mother told investigators she had spoken with her daughter about leaving the child in the bathtub, but the defendant couldn't recall the conversation, according to the affidavit.

A search of the residence showed a laptop on a couch in the living area, according to the affidavit. The screen was showing a Facebook page.

Johnson was being held Tuesday on $100,000 bond, according to Finch. A bond hearing is scheduled for January 31.

A phone number for Johnson's residence did not work Tuesday. A call to the Weld County Public Defender's office was not immediately returned.