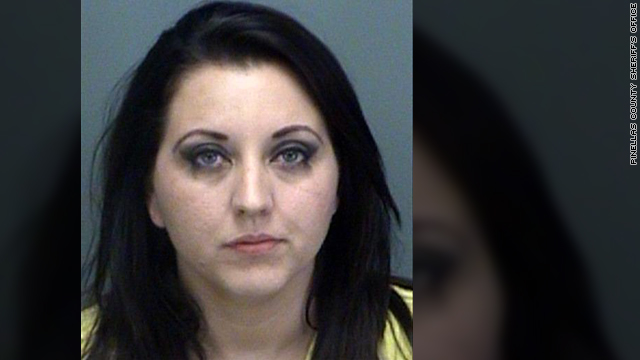 (CNN) -- After spending nearly 12 hours behind bars, accused of slapping a police horse, a Florida woman was happy to be home Monday, but said she still doesn't understand why she was arrested.

"The horse had me pinned up against the wall," Stephanie Six told CNN. "It scared me, so I put my hand up into his face as a reaction."

Six, 29, was arrested early Saturday morning outside a bar in downtown St. Petersburg. She said she was with a group of friends, waiting for others, when police approached them "aggressively," and told them to leave.

"They're saying I slapped this horse when that's not the case," said Six. "It's embarrasing!"

Police were using mounted patrols to try to control crowds outside the bar when, they say, Six hit the horse, according to local news reports.

Six, who says she was never read her rights, was charged with battery on a police horse and released with time served.

"I've never been arrested before, now I have a record," said Six, who was also not happy about being branded as an animal abuser.

CNN contacted St. Petersburg police and the state attorneys office, but officials were unavailable for comment because of the Martin Luther King Jr. holiday.

Antoinette Campbell contributed to this report.