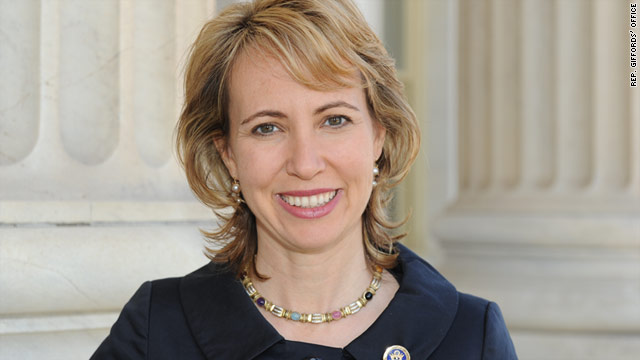 Bone fragments were pushing down on one of U.S. Rep. Gabrielle Giffords' eyes, a doctor says.
STORY HIGHLIGHTS

For more on Giffords, check out CNN affiliate KGUN-TV in Tucson.

Tucson, Arizona (CNN) -- The congresswoman wounded in the January 8 mass shooting in Arizona underwent a successful procedure Saturday to repair a fracture in the roof of her right eye socket, doctors said Monday.

U.S. Rep. Gabrielle Giffords tolerated the two-hour, minor operation well, and is "back at that same baseline where she was before surgery," said Dr. Michael Lemole, chief of neurosurgery at University Medical Center.

The operation was necessary, he said, because bone fragments were pushing down on Giffords' eye. When she arrived at the hospital shortly after the shooting, doctors did a quick operation but "did not want to do the full repair" because she was in critical condition.

The operation involved opening a window in Giffords' skull through an incision over her eyebrow, removing the rim of her eye socket, removing the bone fragments and then reconstructing the socket with the help of metal mesh, doctors said. She will need another skull repair surgery, but that will be done later.

Asked when Giffords might be released from the hospital and into a rehabilitation center, Lemole said it could be as soon as "days to weeks."

Lawmakers back at work after shooting

Last steps before the shooting

Doctors also took a breathing tube out of Giffords' nose, but inserted a second one into her neck. That tube does not allow her to get air past her vocal cords, meaning she cannot talk, said trauma surgeon Dr. Randall Friese. It can be switched out later with a tube that will allow her to speak, he said. Giffords could mouth words "when she's ready to do that," he said.

Asked about a report that Giffords gave her husband, Mark Kelly, a neck rub, Lemole said, "there's a lot of inference there" but said "it does imply that she's recognizing him." Doctors do not know whether she can see out of both eyes, he said, as that is pending a detailed examination.

Kelly has told doctors that he has seen her smile, Friese said. "We're all very optimistic, so we could be wrong, but we all want to see the best and sometimes we see what we want to see. But if he says she's smiling, I buy it."

The other two patients still hospitalized from the shooting are in good condition, he said, and are close to being discharged.

Giffords was upgraded from critical to serious condition on Sunday, eight days after being shot in the head at a public event.

A total of 19 people were shot at the "Congress on Your Corner" event at a Tucson supermarket. Authorities believe Giffords was the target of the mass shooting that left six dead and another 13 wounded. A 22-year-old suspect, Jared Lee Loughner, is in custody.

On Sunday, the funeral for victim Dorwan Stoddard took place in Tucson. Witnesses said when the gunfire rang out, Stoddard, 76, was trying to protect his wife, Mavy, when he was shot in the head and fell onto her.

During Stoddard's funeral, Pastor Mike Nowak of Mountain View Church of Christ wore a red shirt and cowboy boots in honor of Stoddard, according to CNN affiliate KGUN.

Nowak said Stoddard -- who took care of the church's maintenance -- was so persistent that when he fell through the church's roof while making repairs one day, he wrapped his own arm in paper towels and electrical tape and kept working, KGUN reported.

"He didn't die a hero. He lived a hero," Nowak said, according to KGUN.

Mavy Stoddard was shot three times in her legs but is expected to recover.

"He died for me, and I have to live for him," the widow said, KGUN reported.

A memorial for Gabriel "Gabe" Zimmerman, 30, also took place Sunday. Zimmerman was director for community outreach on Giffords' staff and was engaged to be married. Cameras were not allowed inside the memorial. Footage from KGUN showed people leaving the event, some of them stopping to embrace one another.

The contentious issue of gun control was put in the spotlight Saturday when one of the 13 wounded in the attack was involuntarily committed to a county mental services unit after he made threats against a Tea Party member at a town hall event in Tucson.