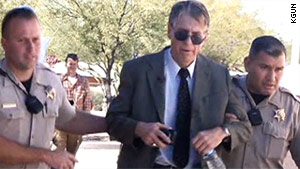 James Eric Fuller, 63, was involuntarily committed after he made threats against a Tea Party member.
STORY HIGHLIGHTS

James Eric Fuller, 63, was involuntarily committed after he made threats against a Tea Party member at the Tucson event sponsored by ABC News, Ogan said.

Fuller photographed Trent Humphries and said "You are dead" when Humphries began speaking at the event, according to Ogan.

ABC News reported that the shooting victim became agitated and mumbled something that prompted him to be detained by police. Footage showed most of the audience filtering out, seemingly unaware, during the confrontation.

Humphries has not pressed charges against Fuller and said Saturday that he doesn't want to do anything to heighten tensions after the shooting.

The Pima County Sheriff's Department said Fuller was taken into custody after 12 p.m. (2 p.m. ET) and was in a county facility. He could not be reached for comment.

The town hall event was held at St. Odilia Church in the southern Arizona city and was taped for Christiane Amanpour's "This Week" program on ABC.

Earlier this week, Humphries told CNN that he believed "all the politics, all the things that are going on right now are almost exclusively from the left" -- suggesting that he felt the Tea Party and fellow conservatives were being criticized.

"It's sick that people are making this into a political issue, when it's a tragedy for our community," he said. "There's people ... who were kind of hoping this would have been the Tea Party (member). They want to cudgel to go after the Tea Party."

CNN's Chuck Johnston and Kevin Bohn contributed to this report.