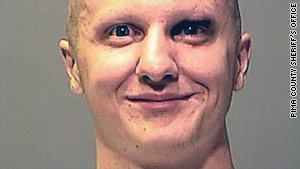 (CNN) -- Jared Lee Loughner was frightening fellow students and acting "creepy" and "very hostile" in incidents throughout 2010, according to newly released records from the community college that ultimately suspended him.

Loughner, accused in Saturday's rampage in Tucson, Arizona, that left six people dead and apparently targeted Rep. Gabrielle Giffords, was the subject of several reports by the Pima Community College Department of Public Safety and the college's police department.

In February, a report from the Department of Public Safety said Loughner reacted strangely to a poem read in one of his classes. He "said things that were a huge leap from the context of the poem and said things about abortion, wars, killing people, and 'why don't we just strap bombs to babies,' " according to the report.

The school's Division Dean Patricia Houston "said that Loughner has a 'dark personality' and is kind of 'creepy' and they had resolved to just keep an eye on him," according to the report. It added that one student thought Loughner might have a knife in a protective cover but wasn't sure.

Loughner had "some prior drug involvements but no warrants or anything of immediate concern," the reported noted.

Two months later, in April, a public safety officer responded to an incident inside a campus library. A staffer complained that Loughner was making some loud noises at a computer. When questioned by the officer, Loughner explained that he "was really into music and that sometimes he would be enjoying the music and excitedly utter phrases and words from the songs" when listening on earphones.

The next month, there was a report of "suspicious activity" involving Loughner in a Pilates class. When he was told his grade would be a B, he became "very hostile." The teacher "felt like it might become physical" and felt "intimidated," according to the report.

In June, Loughner was reported to be disruptive in math class. A report suggested that he could be under the influence of a controlled substance.

Among his strange behaviors: He insisted on calling the number six "18."

"Houston has advised that the instructor and students in the class are uncomfortable with Loughner inside their class and are afraid of any repercussions that could exist from Loughner being unstable in his actions," the report said.

In September, police were dispatched after Loughner created "a disturbance" in a class when he was told he would get only half-credit on an assignment because it was late.

"Loughner could not verbalize what the problem was and kept referring back to the freedom of speech," the report said. As Loughner spoke to an officer, he tilted his head, and his eyes were "jittery and looking up and to the left."

Loughner also kept speaking of his "freedom of thought," the report said. An officer put him through "a channel of basic reasoning questions." One was whether it's OK to yell "fire" in a crowded theater. "Loughner's thought process through the freedom of speech thinking is yes, that is acceptable because he has the freedom of speech and there is no consequence."

The report noted "that there might be a mental health concern involved with Loughner."

Days later, on September 29, a police officer was dispatched to deliver a suspension letter to Loughner. When the officer found the young man, he was with his father. "While inside the garage I spoke with Jared who held a constant trance of staring as I narrated the events that had transpired," the officer wrote in his report.

It took an hour. Jared Loughner then responded, "I realize now that this is all a scam," according to the report.

The narrator, who identified himself as "Jared," said, "We are examining the torture of students," and added, "This is my genocide school."

He also said, "I haven't forgotten the teacher that gave me a B for freedom of speech."

Loughner was enrolled at Aztec Middle College, a partnership between Tucson schools and Pima Community College that helps high school dropouts transition to community colleges, PCC President Sylvia Lee said. He took classes at the college until October, when withdrew after five contacts with police and a suspension.

Algebra instructor Ben McGahee said he had Loughner removed from his class in June after multiple disruptions in the first three weeks of the course. McGahee said Loughner sometimes shook, blurted things out in class and appeared to be under the influence of drugs at times.

Another classmate, Steven Cates, said Loughner "would sit at his desk with that grin that you see in the mug shot that I've seen on the news" and clenching his fists.

Pima Community College told Loughner that he needed a letter from a mental health professional certifying that he posed no danger to himself or others before he would be allowed to return. Yet nothing in his record turned up in the background check carried out in November, when he bought the weapon police say was used in the killings.