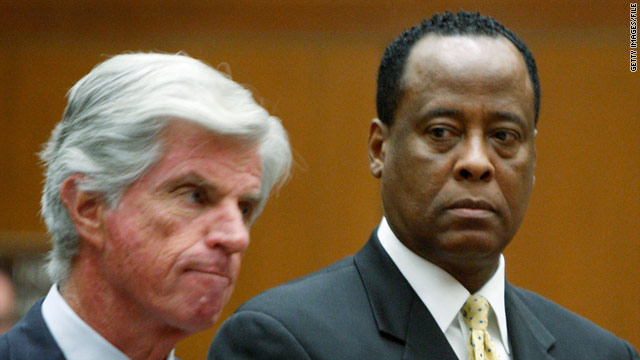 Los Angeles (CNN) -- Dr. Conrad Murray sent an email to a British insurance agent assuring him that Michael Jackson was in good health just 40 minutes before the doctor realized the pop star had stopped breathing, according to testimony Monday.

The email, found on Murray's iPhone, was introduced Monday at a preliminary hearing to decide if the involuntary manslaughter case against Murray will go to trial.

Murray ordered more than 15 liters of propofol -- a surgical anesthetic -- and 80 vials of injectable sedatives from a Las Vegas pharmacy in the three months before Jackson's death, a pharmacist testified.

The drugs were shipped to the Santa Monica, California, apartment where Murray stayed with a girlfriend while he worked as Jackson's personal physician, according to pharmacist Tim Lopez and earlier witnesses.

A Los Angeles coroner's investigator testified Friday about finding empty and unused drug vials near Jackson's bed and in a closet after Jackson's death.

The coroner concluded that "acute propofol intoxication" in combination with sedatives killed Jackson on June 25, 2009.

Murray injected Jackson with a series of sedatives and finally with propofol that morning, according to Los Angeles Deputy District Attorney David Walgren. While Jackson slept, Murray made and received several phone calls and replied to emails.

"As far as the statement of his health published by the press, let me say they're all malicious to the best of my knowledge," Murray wrote in an email sent from his iPhone at 11:17 a.m. to an insurance agent.

The agent, who was considering "cancellation insurance" for Jackson's upcoming London concerts, sent Murray an email earlier in the morning raising concerns about media reports about Jackson's health.

After sending the e-mail, Murray apparently began a series of cell phone calls, including the last conversation with Houston cocktail waitress Sade Anding. She testified Friday that she was on the phone with Murray when he suddenly stopped responding.

That moment, at about 11:57 a.m., is when prosecutors contend Dr. Murray first realized that Michael Jackson has stopped breathing.

"I didn't hear him on the phone anymore," Anding said. "I heard commotion as if the phone was in a pocket and I heard coughing and I heard a mumbling of voices."

Several of Jackson's family members were in court for Monday's testimony, including sisters Janet, La Toya and Rebe. His mother, Katherine, and brothers Jackie and Randy Jackson also were in court.