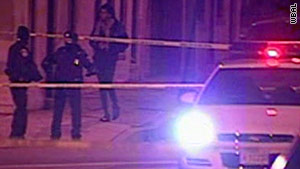 (CNN) -- Two people -- an officer and a civilian -- were fatally shot Sunday morning after a fight at a Baltimore club, police said.

Police responded to a report of a disturbance at the Select Lounge in downtown Baltimore about 1:15 a.m., said Anthony Guglielmi, spokesman for the Baltimore Police Department. A fight spilled out of the club and into the parking lot, police said.

Four others -- including another officer -- were injured from gunshot wounds but are expected to survive, Guglielmi said.