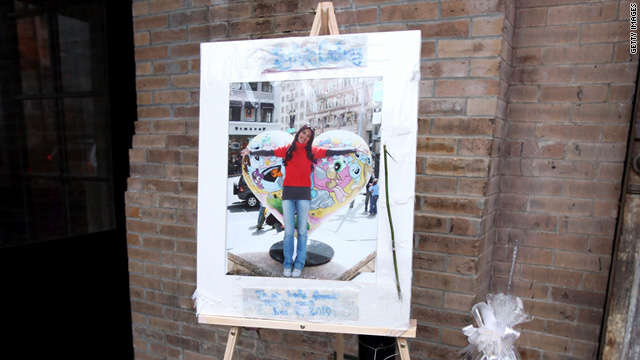 Memorials to Sylvie Cachay were placed by admirers outside Soho House in New York after her death last month.
STORY HIGHLIGHTS

New York (CNN) -- The ex-boyfriend of a swimsuit designer whose body was found at a chic New York hotel has been indicted on one count of murder in connection with her death, according to a statement from the Manhattan District Attorney's office Tuesday.

Nicholas Brooks, son of "You Light Up My Life" composer Joseph Brooks, pleaded not guilty at his arraignment Tuesday afternoon to one charge of second-degree murder, and is next expected in court February 8, according to Manhattan District Attorney spokeswoman Joan Vollero. If convicted, Brooks could face 25 years to life in prison.

The bruised body of Sylvie Cachay, 33, was discovered at the Soho House club and hotel on December 9, police said.

A guest staying on a lower floor of the hotel reported to hotel management that water was leaking through the ceiling of that guest's room, according to court documents.

A hotel employee investigating the source of the leak entered Cachay's room and discovered her body submerged in water in an overflowing bathtub, the documents said.

Her death was later ruled a homicide, according to New York medical examiner spokeswoman Grace Brugess.

But Brook's attorney, Jeffrey C. Hoffman, said last month his client believes at least one other person had been in the room.

"I believe he is, in fact, not guilty," Hoffman said.

According to court documents, police said the only person in the hotel room with Cachay, besides Brooks, was a hotel employee who delivered ice and was inside for about one minute.

Brooks escorted the employee into the room and remained after the worker left, police said.

Authorities said they relied on interviews with hotel employees and surveillance videos from the location.

Police said they are investigating a time frame in which the killing occurred.

Cachay's body sustained bruising on the neck and bite marks, police said. An autopsy indicated that the designer suffered injuries that were consistent with neck compression, court records show.

Cachay suffered internal hemorrhaging, injuries to her scalp and cuts to her lips and mouth, the documents said.

"Sylvie Cachay was one of those rare individuals who truly sparkled when she spoke," said publicist Kate Godici. "She will be deeply and painfully missed, yet celebrated, honored and never forgotten."