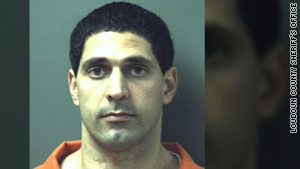 Elias Abuelazam is suspected of 18 stabbings -- five of them fatal -- in Michigan, Virginia and Ohio, officials say.
STORY HIGHLIGHTS

(CNN) -- The lawyer for an accused serial stabber said he filed motions on Monday for a change of venue and a private psychiatric evaluation meant to preserve his client's right to a possible insanity defense.

He is suspected of 18 stabbings -- five of them fatal -- in Michigan, Virginia and Ohio, Leyton said.

His attorney, Edward Zeineh, said he is uncertain whether he will use the insanity defense, adding that he was concerned over a local jury's capacity to provide a fair trial given the level of publicity surrounding the case.

Abuelazam has pleaded not guilty and is expected to undergo a separate court-ordered psychiatric evaluation, Zeineh said. Abuelazam remains jailed while he awaits trial.

Monday's hearing was one of several hearings since a September incident in which a fellow inmate tried to serve a poisoned apple to Abuelazam after the two had an altercation behind bars.

The incident reflected "a security concern for my client," Zeineh said. "The jail took steps to assure me it wouldn't happen again."

The tainted apple, sprayed with oven degreaser with "poison components in it," never made it out of the kitchen, Pickell said.

"We found out immediately, " he said, but declined to say how guards learned what happened.

Pickell said Franklin apparently targeted Abuelazam after the two "had some words with each other."

Pickell said Franklin had nearly completed all of his time for a simple assault charge and was a trustee -- a nonviolent prisoner who qualified for jobs that could help reduce his sentence.

If convicted of attempted poisoning, Franklin could face up to 15 more years behind bars, Pickell said.