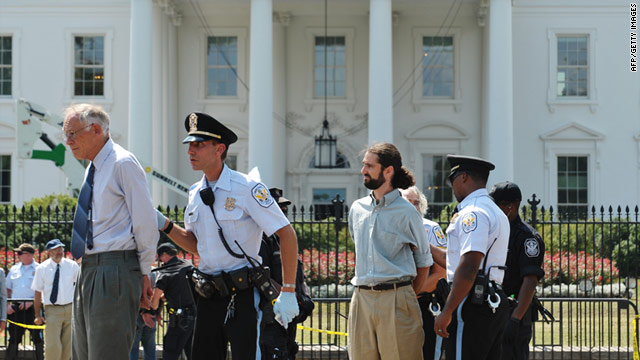 Activists opposed to the pipeline have been protesting outside the White House since August 20. Some 370 have been arrested.
STORY HIGHLIGHTS

Washington (CNN) -- A controversial proposal to build a giant oil pipeline between Alberta, Canada, and Texas cleared a key hurdle Friday as the State Department said the project could be built without significant damage to the environment.

Known as Keystone XL, the 1,700-mile pipeline has drawn fierce criticism from environmentalists, who are staging a two-week demonstration at the White House. So far, some 370 people have been arrested for protesting the project.

"There would be no significant impacts to most resources along the proposed pipeline corridor," Bureau of Oceans and International Environmental and Scientific Affairs (OES) Assistant Secretary Kerri-Ann Jones told reporters on the release of the State Department's final environmental impact statement.

She stressed that the report is not the last word on the pipeline, which now must pass through a 90-day review period that will include public hearings. A final decision is expected before year-end.

Opponents say the project would bind the country to an unnecessary and dirty form of oil for decades to come and expose surrounding areas to dangerous spills and leaks.

"It was disappointing, but expected," Daniel Kessler, a spokesman for the Rainforest Action Network, said about the State Department's report.

He is part of a group of activists that has been protesting the pipeline at the White House since August 20. Some 370 people have been arrested so far and 2,000 are planning to be before the scheduled end of the demonstration on September 3, he said.

According to the U.S. Park Police, roughly 50 people have been arrested per day since the start of the demonstration for failure to obey a lawful order.

"It really doesn't make a lick of sense," Kessler said about the pipeline. "There's no excuse for not doing the right thing on this."

The company that wants to build the pipeline, TransCanada, cheered the State Department's report. It emphasized the project's benefits, economic and otherwise.

"The fundamental issue is energy security. Through the Keystone system, the U.S. can secure access to a stable and reliable supply of oil from Canada, where we protect human rights and the environment, or it can import more higher-priced oil from nations who do not share America's interests or values," said Russ Girling, TransCanada's president and chief executive officer.

The pipeline would draw from oil sands deposits in Canada and pass through Montana, South Dakota, Nebraska, Oklahoma and Texas, with construction on an existing pipeline in Kansas. It could transport up to 830,000 barrels per day and is estimated to cost $7 billion.