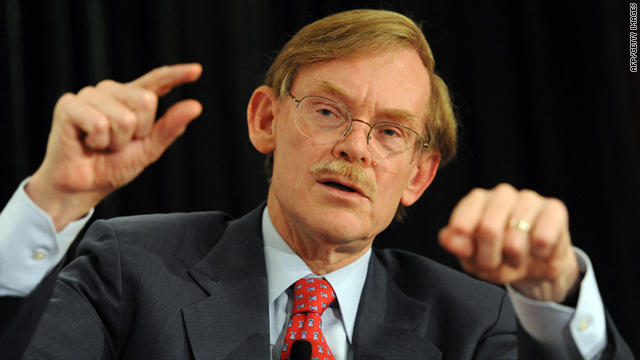 Robert Zoellick, president of the World Bank Group, gave his assessment of the global economic outlook in Sydney on Sunday.
STORY HIGHLIGHTS

(CNN) -- The head of the World Bank warned Sunday that many key market players have lost confidence in recent weeks, pushing the fragile global economy into a "new danger zone."

Speaking to members of the Asian Society in Sydney, Australia, Robert Zoellick said events the past few weeks in Europe and the United States already have had an adverse impact, and could signal even bigger problems ahead. Several European nations continue to struggle with high debt, slow economies and other issues, while U.S. politicians went to the wire before they raised its debt ceiling -- only to see credit agencies downgrade its credit rating, and stock markets flounder.

"There was a convergence of some events in Europe and the United States that has led many market participants to lose confidence in the economic leadership of some of the key countries," Zoellick said.

This reflects growing sentiment that years after the start of a major recession conditions could continue to deteriorate, the World Bank president said. His organization is a key player in the global economy, with its website noting it offers "financial and technical assistance to developing countries."

Paul Krugman's take on the economy

"I think that those events combined with some of the other fragilities in the nature of the recovery has pushed us into a new danger zone," Zoellick said. "And I don't say those words lightly."

Zoellick, a former U.S. Trade Representative in the administration of President George W. Bush and later an executive at the investment giant Goldman Sachs, added that it was important for countries "to get ahead of" their debt problems rather than pursue patchwork solutions.

He elaborated to Australia's ABC News that a long-term solution "requires attention to some of the fundamentals" -- not just tackling government debt but also bolstering economic competitiveness and spurring growth.

"Unless the economic leadership gets ahead of the problem in its different dimensions, you'll see the lack of confidence ... spread," Zoellick said.

He warned that nations that otherwise should be able to weather the economic storm, like Spain or Italy, could find themselves in trouble.