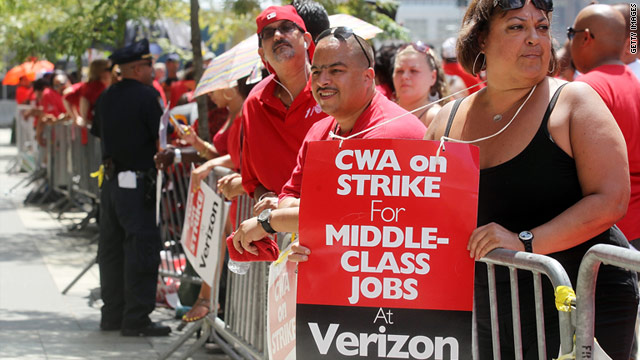 New York (CNN) -- About 45,000 unionized workers at telecommunications giant Verizon walked off the job Sunday after contract talks stalled over the weekend, the company and union leaders said.

Contracts with the Communication Workers of America and the International Brotherhood of Electrical Workers from Virginia to Massachusetts expired at midnight Saturday.

The walkout does not affect Verizon's wireless customers, and Verizon spokesman Peter Thonis said the company's phone lines were up and running Sunday with managers replacing the striking workers.

CWA spokesman Bob Master told CNN that some conversations were still going on, but he called the bargaining "the worst we've ever seen in 50 years." He said the company is demanding rollbacks of wages, benefits and union rules while posting profits of up to $6 billion.

"Verizon is not General Motors or Ford," Master said. "This is a company that has made billions upon billions of dollars. Because of the recession and anti-union climate, they have decided to try and drive down the middle-class standards of our members."

The CWA is the larger of the two unions on strike, representing more than 30,000 workers. Master accused Verizon of wanting to subcontract jobs to nonunion workers and outsource others "to places like Mexico and the Philippines."

Verizon said it needs workers to pick up a share of health benefits, which it says cost it $4 billion per year for 800,000 employees, retirees and their families. It said its benefits would remain "near the top of those offered by comparable companies" even with the concessions demanded.

"It's regrettable for our employees and our customers that the Communications Workers of America and the International Brotherhood of Electrical Workers have decided to walk away from the table instead of continuing to work through the issues," Marc Reed, Verizon's executive vice-president of human resources, said in a written statement.

Thonis said customers should expect "no major impact" from the walkout. Repair calls may take longer, but "nothing detrimental," he said.