Is a Greek default inevitable? 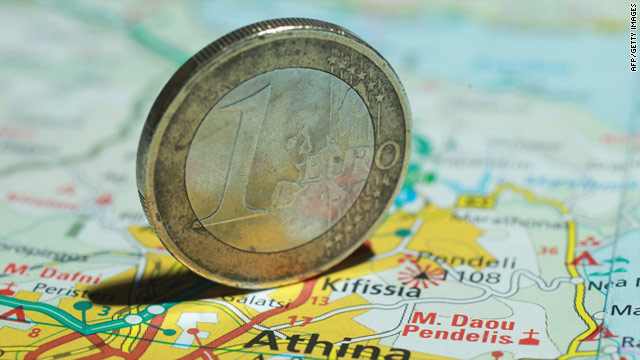 A default by Greece on its loans would have a major impact worldwide.
STORY HIGHLIGHTS

Greece is widely expected to default on its debt. The question is how messy a default will be, what kind it could be and when it will happen.

The country is waiting for an €8 billion ($11 billion) tranche of money to be delivered from its international creditors -- the International Monetary Fund and its eurozone peers -- but markets expect the money will simply delay a default.

Disbursement of the funds has been flagged but still needs final approval from the Eurogroup, the European Central Bank and the IMF. It is expected to be handed over in early November.

Greece: Impact of the crisis

The money has come from the country's original €110 billion ($150 billion) bailout which was agreed May last year, and effectively heralded the start of the eurozone crisis. Greece has since negotiated a second package of aid, which includes forcing investors to take cuts in the value of their Greek bonds, or "haircuts."

Greece has been implementing harsh austerity measures to try and balance its books, but is facing revolt on the streets and finances which are worse than expected. Its economy is expected to contract more than 5% this year, and it cannot raise money with investors due to the high premiums they demand -- leaving it dependent on the bailout funds.

This week, the so-called troika -- inspectors from the European Commission, ECB and IMF -- will report on Greece and its financial position.

As the troika finalizes its report, European leaders remain under intense pressure to deliver a grand plan to stem the crisis when they meet this weekend.

Why is Greece still being supported?

The default of a eurozone member is politically and economically charged. The common currency lies at the heart of the "European dream" and a default by one its members would be devastating.

So Greece is being financially supported by its eurozone peers as Europe's leaders, led by Germany's chancellor Angela Merkel and France's president Nicolas Sarkozy, desperately attempt to figure out how to fix the problems. But the situation is getting worse as the eurozone economy teeters on a second recession.

There has been a steady drip of information indicating a default is recognized as a possible outcome -- including comments from German economy minister Philipp Roesler, leader of Merkel's junior coalition partner the Free Democratic Party, that the orderly bankruptcy of Greece should no longer be taboo in the debate.

However, the potential for the crisis to spread to Italy and Spain -- the so-called "contagion" effect -- is a powerful incentive to contain the problem. Bailouts of Greece, Ireland and Portugal have created backlashes in countries such as Germany; the prospect of holding up the bloc's far larger economies is economically and politically unpalatable.

So what are Europe's leaders planning?

Europe's leaders say they are working on a comprehensive plan to address the crisis. It follows a meeting of finance ministers over the weekend in which a timeframe was set to stem the crisis by next week's gathering of the European Council. The G20 then meet early November, at which point the plan is expected to be finalized.

Several ideas are being floated at this point. A recapitalization of Europe's banks to ensure they hold more reserve funding in the case of a financial shock, greater "'haircuts" to the value of Greek debt held by private investors, and a beefing up of Europe's stability fund are all on the agenda.

But Europe's leaders have come up with grand plans before and been knocked back by the markets. Unless this plan addresses all the concerns with some force, the crisis is likely to escalate.

The markets greeted last weekend's suggestions that a sweeping plan was about to be released with enthusiasm. However, that has started to fade as officials including German finance minister Wolfgang Schaeuble play down the chances of a rapid end to the crisis.

How serious is default?

There have been numerous grim predictions. Most doomsday scenarios see global panic and market sell-offs. A default might mean French and German banks exposed to the debt will begin to struggle, resulting in a credit lockdown by the wider banking sector.

If banks are forced to take this hit, it could have global economic consequences similar to those seen in the financial crisis that followed the collapse of Lehman Brothers in 2008.

Investors would also begin looking at which other countries are facing financial difficulties, including Italy and Spain. If investors stop supporting these countries, the eurozone's stronger countries could again be leaned on for financial assistance.

But that's where the help from Europe, and further afield, could run out of capacity. Italy's economy, for example, makes up 17% of the eurozone -- nearly seven times bigger than that of Greece. These countries are regarded as "too big to fail," because bailouts would be too expensive.

Greece's economy has struggled since the country joined the euro in 2001. In 2004, it admitted its budget deficit was higher than allowed under rules of entry.

By 2008 the government had narrowly passed a belt-tightening budget, designed to trim its massive national debt burden, triggering massive protests. In 2009, Greece admitted its deficit would be more than 12% of gross domestic product -- far higher than previous estimates and more than four times the requirements of entry into the eurozone.

The country was hit with ratings downgrades, pushing its sovereign bonds into so-called "junk" territory. At the same time, resistance to the austerity measures and a contracting economy have made it extremely difficult for Greece to clamber its way out of its financial problems.

Is it time for Greece to drop out of the euro?

Greece is running out of options as pressure grows on its finances. Unless it can make good on massive debts it will default, with heavy consequences not only for the eurozone countries but for the global economy.

The ECB, IMF and eurozone countries have poured money into Greece to prevent default and may have to continue doing so unless another solution can be found.

This has led some to call for Greece to be allowed to quit or be thrown out of the euro, to ease the burden. Some Greeks also support this since they believe it would spare them from harsh austerity measures demanded as conditions for assistance.

Economists are divided. Many say it is impossible for Greece to drop out because the consequences would be so disastrous that eurozone economies will not allow this to happen.

However, the likelihood is increasing as Greece continues to struggle with its financial obligations.

How would quitting the euro affect the Greeks?

This would liberate Greece from the eurozone's fixed exchange rate, allowing it to become a more competitive exporter and an even more attractive tourist destination.

But it would come with a heavy price. It would still leave Greece in debt and reliant on handouts that former eurozone partners would be less willing to supply. It would also mean Greeks would face higher prices for imported goods.

It is also likely to drive people out of the country, as they face lower wages and higher taxes, leaving the country unable to recover for years.