Say it ain't so for a cup o' joe: Price of coffee beans climb 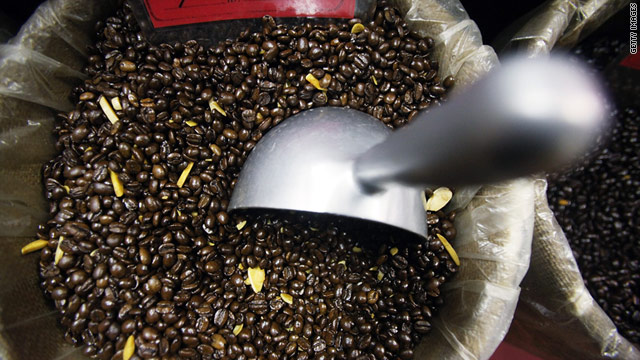 The cost of coffee beans hasn't been this high in three decades. Many coffee shop owners are raising prices.
STORY HIGHLIGHTS
RELATED TOPICS

(CNN) -- Consumers got a jolt this week with news that the price of coffee was hovering near $3 a pound, the highest price in more than three decades, forcing many coffee houses to consider raising prices or cutting services.

Bad weather in the world's top coffee growing regions, a weak dollar and pressure from emerging coffee drinking markets is putting pressure on the industry, which saw coffee beans trading Tuesday at about $3 a pound -- just below its peak of $3.22 a pound on Friday.

The last time coffee prices were higher was in 1977 after bad weather in Brazil, one of the world's leading coffee producers, destroyed more than half of the country's coffee crops.

"We've been hit hard for close to year now," said Martin Diedrich, owner of Kean Coffee houses in Southern California. "I can't always ask what I need to because I get push back from my guests, from my customers. So I have to take a margin hit."

The issue of rising coffee prices was expected to take center stage Thursday when many of the nation's coffee retailers and distributors gather at the Specialty Coffee Association of America's annual symposium in Houston, Texas.

The price of coffee beans represent about 15 percent of the actual cost of a cup of coffee at most small coffee houses, with food, labor and operating costs making up the remainder, said Ross Colbert, the global strategist for beverages at New York-based financial services provider Rabobank.

That percentage, though, is significant enough to have forced small coffee shop owners to have hiked prices two or three times over the past year, Colbert said.

Big-time coffee companies, such as Starbucks as well as corporations behind Folgers and Maxwell House, also hiked prices over the past year to keep up with the rising cost of beans.

Diedrich, considered one of the pioneers of the coffee house culture, has tried to keep his cup prices stable. But he has been forced in recent months to pass on the increased costs of his roasted specialty beans to his customers.

"I'm paying upwards of six or seven dollars for my premium east African coffees," said Diedrich, who founded Diedrich Coffee. The company was later sold to Starbucks, which shuttered the stores.

The vast majority of coffee consumed in the United States is imported. Hawaii is the only coffee-producing state and cannot supply enough to meet the nation's needs.

The economic boom in Brazil has played particular havoc on the coffee industry with the country becoming more of an economic player on the world's stage.

"The fundamental thing that is going on is that Brazil is dramatically more prosperous. Their currency is going up, their wages are going up and they are the world's largest producer of coffee," said Richard Carlson, chairman of the Tucson, Arizona-based Spectrum Economics.

Carlson said Brazil's economy isn't showing any signs of slowing down. That, in turn, will likely keep coffee prices up, he said.

Though Colbert said demand for coffee would diminish somewhat at the conclusion of the coffee growing season in May, neither he, Carlson or Diedrich expected prices to significantly drop because of the length of time it takes for a coffee crop to mature.

"It's going to be another year or two before some of the production catches up with the market," Diedrich said.