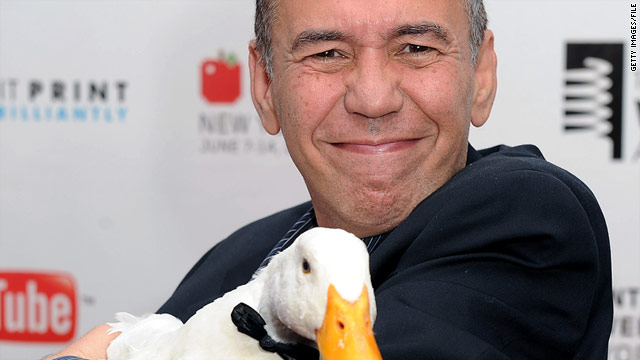 Actor and comedian Gilbert Gottfried was fired by Aflac after tweeting jokes about the earthquake and tsunami in Japan.
STORY HIGHLIGHTS

(CNN) -- The Aflac duck lost its voice Monday after the insurance giant fired the comedian behind the commercial quack for tweeting jokes about the earthquake and tsunami that have devastated Japan.

The Columbus, Georgia-based company fired Gilbert Gottfried less than an hour after discovering the tweets, according to a news release from Aflac.

"Gilbert's recent comments about the crisis in Japan were lacking in humor and certainly do not represent the thoughts and feelings of anyone at Aflac," Michael Zuna, the company's senior vice president and chief marketing officer, said in a statement.

The earthquake and tsunami have left more than 2,400 people dead and thousands more in shelters or missing.

Japanese village washed away by tsunami

Most of the tweets attributed to Gottfried make light of the natural disaster in either a flippant or a sexual manner.

"Japan called me. They said 'maybe those jokes are a hit in the U.S., but over here, they're all sinking.' "

"I was talking to my Japanese real estate agent. I said 'is there a school in this area.' She said 'not now, but just wait.' "

Zuna said, "Aflac Japan -- and, by extension, Japan itself -- is part of the Aflac family, and there is no place for anything but compassion and concern during these difficult times." He added that the company was giving the International Red Cross 100 million yen ($1.2 million) to aid in disaster relief.

Zuna also noted that Gottfried had not provided the quack for the Japanese version of the Aflac duck.

Gottfried is perhaps best known as a character actor in such Hollywood movies as "The Adventures of Ford Fairlane," "Problem Child 1 and 2" and "House Party 3." His high-pitched, gravelly voice also provided the dialogue for Iago, the parrot sidekick of an evil sultan's adviser in the Disney cartoon movie "Aladdin," as well as subsequent sequels.

He was also a one-season cast member of Saturday Night Live in 1980.

Gottfried issued a statement Tuesday apologizing for his "attempt at humor regarding the tragedy in Japan."

"I meant no disrespect, and my thoughts are with the victims and their families," he said in the statement.

Zuna said Aflac "will immediately set plans in motion to conduct a nationwide casting call to find a new voice of the iconic Aflac Duck."