Let it grow: How Clapton's guitar can make you rich 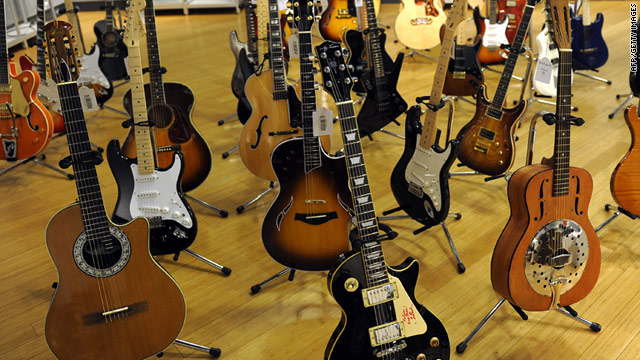 A selection of the Eric Clapton guitars on sale.
STORY HIGHLIGHTS
RELATED TOPICS

Editor's Note: CNN's Tony Maddox has been playing guitar for more than 30 years, although you may find that hard to believe if you heard him. He owns, or "has invested in" as he puts it, more than 20 guitars.

(CNN) -- The more I think about it the more I am convinced I need one of Eric Clapton's old guitars.

Bonhams is hosting an auction of "Slowhand's" gear in New York. I really should be there and as a responsible parent make some investments for my children's futures.

Now nobody should take financial advice from a washed-up, failed rock guitarist like me. But if you will just go with me on this, I do think I may be onto something.

No doubt, vintage guitars made by the right company, at the right time, and played by the right people, are a serious investment opportunity.

Headlines were made in 2004 when Clapton's Blackie guitar sold for $959,000. Actually that guitar broke one of the usual rules for collectors because it was not all original. He had swapped parts from other guitars, which usually kills the resale value.

But what it did have was provenance. And what provenance. This was the guitar that Clapton had used over two decades, both in the studio and on stage. It also had a lot of people who wanted to buy it -- baby boomers who grew up with Clapton, the provider of soundtracks for their lives. And you can own the very guitar he played those tunes on? If you had just under a million bucks burning a hole your pocket it would be crazy not to.

There is nothing that iconic at these sales, but there is a range of very tasty Clapton stuff. Beyond guitars there are amplifiers (also very collectable), stage clothes and other memorabilia. As an investment, provided you avoid bidding frenzy, these would be instruments of unquestioned authenticity, many of which have been used on record and in public performance by a star who has been making music and selling out concerts for nearly 40 years.

The money Clapton raised in these sales goes to the Crossroads Centre, which he founded, which treats drug and alcohol addiction. So, it's for a good cause, it's a good investment, and you finish up with a really cool guitar.

Guitars can be a great investment. Key vintage Fender guitars more than doubled in value in the last decade. If you have an original "Strat" from the 1950s or early 1960s in what as known as a custom color (taken from popular auto colors of the period), you could be looking at a value of up to $50,000 -- not bad for something that would not have cost more than $100 when new.

Of course most people who bought them back then did not do so thinking they were long-term investments so parts were changed, the finishes were battered and repainted and value was subsequently diminished.

I bought a 1961 Strat all original expect for having been stripped down to the wood. It cost between half and a third of what it would have done if the paint had still been on.

Now there is a thriving trade in so called "relic guitars" which are new but treated to give the impression of a battered old road warrior.

Worrying, there are also a lot of guitars being sold as original vintage pieces, which have had parts changed out.

The money involved makes it worthwhile for the fakers who go to great lengths to disguise the changes. So the buyer beware, and always seek out what provenance and guarantees you can.

There is one guitar that is the Stradivarius for collectors. It is the Gibson Les Paul Standard, made between 1958 and 1960. If you had bought one back then -- and you may well have got a discount because it was not a big seller at the time -- you would now be sitting on a guitar which can change hands for well in excess of $250,000.

How does that happen? Well, it brings us back to Clapton. He played a Les Paul on an album by John Mayall and Blues Breakers. The recording is legendary among guitar players.

Suddenly the discontinued Les Paul was in demand. Its value rose, and then soared as it was adopted by one superstar after another. We are talking Keith Richards, Fleetwood Mac's Peter Green, Led Zeppelin's Jimmy Page.

Clapton's Les Paul is thought to have been stolen while he was in rehearsals with his band Cream. Now if that ever showed up, Blackie might well end up being the second most valuable guitar sold in open auction.

So if you want to buy a vintage guitar and have a partner who takes an alternative perspective, point out you are doing it for them, for their future.

And if you find yourself bidding against some heavy set, balding guy, who looks like he knows he really should not be there, give him a break and let him win.