Part of complete coverage from
Gloria Borger
SHARE THIS

The endless GOP audition for president 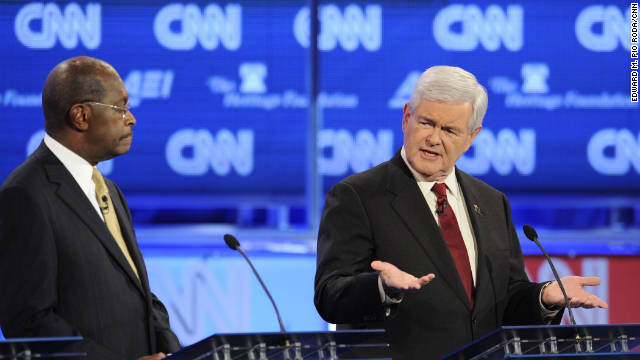 Washington (CNN) -- It's an audition without end, because the Republicans still can't figure out how to cast the lead role.

And so Republicans, undecided and unwilling to settle, continue to move like hummingbirds, from, um, flower to flower. Yesterday, it was Herman Cain. Today, it's Newt Gingrich. Maybe one day, Mitt Romney.

Sure, this is all about the deep and abiding reluctance within the GOP to "settle" for Romney. After the last two years of conservative ascendancy, why go with a candidate who seems more pragmatist than true believer? Why risk nominating another version of George H. W. Bush, who turned on conservatives and raised taxes? No way, they say.

All of which has inspired an obvious GOP conflict between the head and the heart: In their brains, Republicans know they ought to be looking for the most conservative Republican who has a good chance of getting elected. In their hearts, they are driven by anger at President Obama, and they're looking for someone who can make the GOP case -- without compromise.

Simply put, the heartfelt question is the 2012 version of "Mirror, mirror, on the wall, who's the most conservative of them all?"

It's the answer that's complicated.

First, it doesn't help that the non-Mitt GOP field is incredibly weak. Start with Michele Bachmann, who self-destructed when she claimed an HPV vaccine could cause mental retardation. Then to Rick Perry, who couldn't remember his own plan to cut government. Then to Cain who, well, has personal issues. Then to Gingrich, who now seems to be the pick of the non-Mitt litter, dazzling audiences with his professorial instant recall of the Battle of Gettysburg and his obvious willingness to launch a frontal assault on Obama.

Is Mitt Romney the luckiest candidate?

Ah, but it's Newt Gingrich. And any historian knows that Newt has a long personal history of self-destruction. He became famous as the architect of the GOP revolution in 1994 that made him House speaker; then infamous as a lead critic of Bill Clinton's presidential affair while Gingrich was privately involved in one of his own. He's the man calling for civil, Lincoln-Douglas style debates; he's also the man who has called Obama "the most successful food stamp president" in American history. How polite.

And then there's the fact that Gingrich, a leader of one GOP revolution almost two decades ago, hasn't had much to do with the current one. He famously went on TV and called Rep. Paul Ryan's budget -- the Holy Grail for most House Republicans -- "right-wing social engineering." If he seems oddly out of touch with the GOP rank and file, that's probably because he is.

And even if the candidates weren't so problematic, the GOP itself is having some identity issues. The tea partiers, who were so important and popular in the 2010 midterm elections, are fast losing their luster. Recent polls show the tea party lost support nationwide -- as well as in the strong tea party districts.

According to a new Pew Center poll, in the 60 districts now held by tea party members, the GOP is viewed just as negatively as the Democrats. So Republicans, who have spent so much time pandering to the tea party on issues, may now have to readjust.

The tea party may have energized a lot of Republicans, but it may also have traumatized others -- especially those looking for a winner in 2012.

Which brings us back to Mitt Romney. He's getting a tad testy these days about the long audition, telling Bret Baier on Fox that he's not a "lifelong politician" like Gingrich. And he's not for "amnesty" like Newt. And that, of course, he has the "best shot" of replacing Obama if he is the GOP nominee.

He's got his lines down pat. Now Republicans need to figure out what kind of character they want to play the lead.