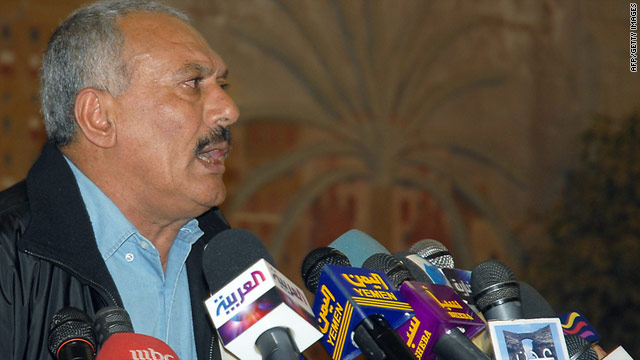 President Ali Abdul Allah Saleh has sent a directive to free 500 detainees as part of a peace agreement with Houthi rebels.
STORY HIGHLIGHTS

(CNN) -- Yemen is releasing hundreds of jailed insurgents after the president's directive to free 500 detainees, the country's embassy in Washington announced Thursday.

President Ali Abdul Allah Saleh's move is a critical part of the February peace agreement between the government and the Houthi rebels in northern Yemen, who have fought for years.

Mohammed Albasha, the embassy spokesman, said in a statement that the nation of Qatar brokered the prisoner release, which has been called a "critical component" of the peace agreement. Qatar oversees the cease-fire.

In return for the move, the Houthis will surrender weapons seized during fighting.

This is an essential step towards building sustainable peace and reconciliation in Sa'adah, a northwestern province of Yemen.
--Mohammed Albasha, Yemen embassy spokesman.
RELATED TOPICS

"This is an essential step towards building sustainable peace and reconciliation in Sa'adah, a northwestern province of Yemen," Albasha said.

Many Yemenis thought another war between the Houthis and the government would erupt in January, but the moves ease tensions and allay fears of more fighting.

One Yemeni government official, who asked not to be named because he was not authorized to speak to the media on the matter, called the development "a good step and it's a very important step."

Dozens of the released Houthis have already arrived in Sa'adah and the weapons surrender has also begun, the official said.

The Houthis, in an e-mail statement, said Yemeni authorities released 428 of their members and the freed people were received by their comrades. In exchange for the release, the Houthis said they surrendered 10 military vehicles. The group cited the efforts of the Qatari mediators.

The rebels are supporters of slain Shiite cleric Hussein al-Houthi, and they began a revolt in 2004.

The antagonism is believed to be both separatist -- over who will have power in the area -- and sectarian -- over whether Shiite Islam will dominate, even though most Yemenis are Sunnis.

Conditions of the cease-fire, which went into effect in February, include clearing mines, not interfering with elected local officials, releasing civilians and military personnel, abiding by Yemeni law, returning looted items, and ending cross-border attacks on the country's northern neighbor, Saudi Arabia.

CNN's Barbara Starr and Mohammed Jamjoom contributed to this report