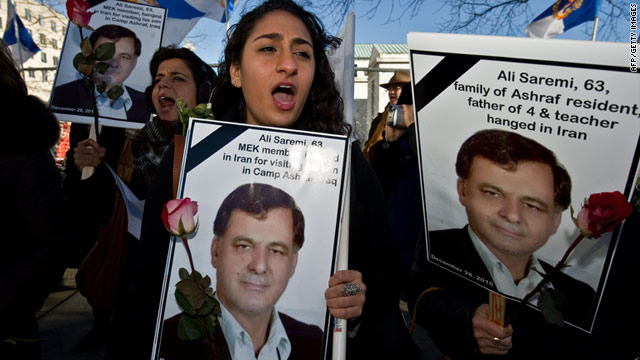 (CNN) -- Iran has hanged a man convicted of spying for Israel and also executed another man who was a member of a government opposition group, state-run media reported Tuesday.

Ali-Akbar Siadat was sentenced to death for working as a spy for Israeli intelligence. The Islamic Republic News Agency said Siadat admitted to transferring information to Israel over several years in exchange for $60,000.

He was arrested in 2008 while trying to leave Iran along with his wife, the news agency said.

A second man, Ali Saremi, was hanged for "fighting against the sacred Islamic Republic of Iran system and launching antagonist propagations," the agency reported.

He was a member of People's Mujahedeen of Iran, also known as the Mojahedin-e Khalq Organization, which has opposed the Iranian government for decades.

Tehran considers the group to be a terrorist outfit, as does the United States. The European Union does not.

Members of a European Parliament group, Friends of a Free Iran Intergroup, condemned Saremi's execution Tuesday, calling it "another crime for which the mullahs will be held to account when freedom is finally restored to that beleaguered nation."

The group also demanded that Iranian leaders "be tried in the International Court of Justice for crimes against humanity."