Some Iraqi churches tone down holiday festivities over threats 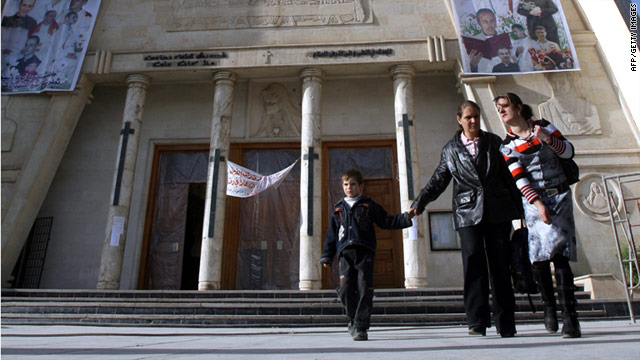 Church leaders in Iraq have decided to tone down Christmas holiday celebrations and increase security around some churches.
STORY HIGHLIGHTS

Church leaders made the decision recently after a meeting in Iraq's Kurdish north, said Archbishop Louis Sako, the head of the Chaldean Church in Kirkuk.

There will be no Christmas Eve mass, no Santa or decorations at some churches during Christmas or the New Year, Sako said. Some churches will continue with Christmas Day mass as usual.

Authorities said they will increase security around churches in Kirkuk. In Mosul, residents said celebrations have been canceled.

However, Baghdad's only Anglican church, St George's, will celebrate Christmas as usual.

"Most of the churches here in Baghdad have canceled Christmas celebrations," said Canon Andrew White, vicar of the church.

"But we have not. We are going to celebrate it to its full. If everything is awful, you have got to find some enjoyment."

Dozens of families gathered at the church Sunday as Santa distributed gifts to children who sang carols.

"We have to celebrate, despite all the problems ... and not allow sorrow to prevail," said Mariam Samir, who worships at the church.

Shameil Mikhael, who brought his 3-year-old daughter for the celebration, said things are not the same after a Baghdad church attack.

The siege at Our Lady of Salvation Catholic church on October 31 left 70 people dead. Fifty-three of the victims were Christians, a minority group in a predominantly Muslim nation.

An al Qaeda affiliate claimed responsibility for the attack and threatened more violence.

"But that does not scare us, it increases our determination," Mikhael said.

Most Iraqis have lost everything, and are holding on to their faith, according to White.

" ... It's very easy to concentrate on what you would give and you would get," he said. "Here we have nothing , when you have lost everything, you only have Jesus left."

According to posts on a popular Iraqi Christian forum, some Iraqi Christian towns and communities abroad have canceled celebrations as a sign of solidarity with victims of the Baghdad church attack.

The violence has prompted a "slow but steady exodus" of thousands of Christians from Baghdad and Mosul, the U.N. refugee agency said last week.

Before the 2003 US-led invasion, Christians were estimated to 1.4 million, but the violence and persecution that followed drove nearly half of them out. Most have fled to the Kurdish region while others have sought refuge overseas.

U.N. offices in Syria, Jordan and Lebanon are reporting a growing number of Iraqi Christian arrivals.

The U.N. High Commissioner for Human Rights said Baghdad and Mosul Christians have headed to other destinations in Iraq, including the Kurdish region and the Nineveh Plains, which have a strong Christian presence.

"We have heard many accounts of people fleeing their homes after receiving direct threats. Some were able to take only a few belongings with them," the agency said in a statement. "Churches and NGOs [non-governmental organizations] are warning us to expect more people fleeing in the coming weeks."