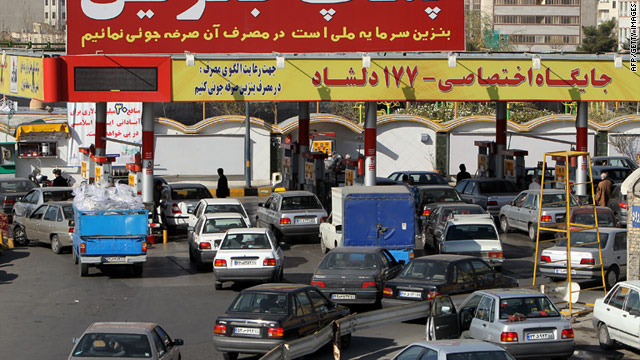 Iranian motorists line up at a gas station in Tehran on Sunday.
STORY HIGHLIGHTS

Tehran, Iran (CNN) -- Gas and oil prices rose in Iran Monday after the country dramatically cut subsidies for its citizens to bolster the nation's sagging economy.

The initiative went into effect Sunday, with the country saying it will gradually remove all subsidies within five years.

While some have said the plan will stoke inflation, others say it is in line with recommendations from international financial organizations to solve Iran's economic woes, Press TV said.

Five years ago, Ahmadinejad's government announced its plan to cut government subsidies and help adjust prices in Iran's economy. That includes a policy to phase out subsidies on staples such as fuel and food, likely causing consumers' costs of such items to rise.

Iran has $10 trillion in oil resources alone, plus natural gas reserves worth between $3.5 and $4.5 trillion, International Monetary Fund mission chief Dominique Guillaume said in an interview posted earlier this fall on that world body's website. But its economy nonetheless has seen lackluster growth, including between 1% and 2% of GDP this past year.

Despite its abundance of fuel, Iran has been pushing to expand its nuclear program. Many in the international community, including U.S. officials, have expressed grave concerns and successfully pushed for sanctions fearing that Tehran might be trying to develop nuclear weapons.

But Iranian leaders have said the nation wants nuclear power, in part to free up more oil to export and pump more money into the economy.

With subsidies that effectively allowed domestic consumers to pay relatively little for oil and gas -- far below what they or people anywhere else would pay on the world market -- Iran was forfeiting potentially huge revenues, explained IMF Senior Economist Roman Zytek on his group's website.

The IRNA news agency reported Saturday that Iranians' use of commodities like fuel "has not followed a reasonable pattern" -- with Zytek saying that many Iranian citizens have been buying excess amounts of oil and gas.