Iranian state media: 6 dead, many buried in rubble after earthquake 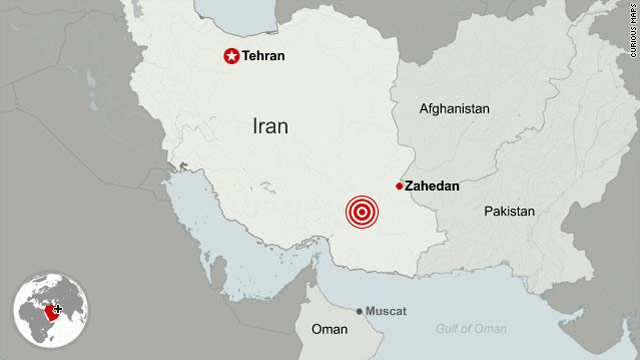 (CNN) -- At least six people were killed Monday night after an earthquake with a magnitude of 6.5 struck southeastern Iran, state-run Press TV reports.

Felt as far away as the Pakistan-Afghanistan border, the temblor was particularly strong between the cities of Zahedan and Bam. It struck late at night and hardest in mostly rural, relatively sparsely populated areas of Kerman province, officials said.

While six are confirmed dead so far, according to Press TV, provincial officials said that they expect the death toll to rise.

Citing eyewitnesses, another state-run news agency IRNA reported that scores of people are trapped in debris of buildings that have been destroyed. Many such sites are in hard-to-reach locations, making any rescue operations even more difficult.

Additionally, at least seven aftershocks struck in the four hours since the 6.5-magnitude quake hit at 10:12 p.m. Monday night, according to the Iranian Seismological Center, based at the University of Tehran, and the U.S. Geological Survey.

Javad Kamali, a deputy governor for Kerman province, told the IRNA that the tremor knocked down phone lines throughout the region. Military and law enforcement workers could communicate only using wireless technology, he added.

Relief and recovery teams, some from outside the area, have converged around the village of Hosseinabad, between the towns of Fahraj and Rigan, Kamali said.

Kerman Gov. Esmail Najjar told IRNA that although the earthquake's reach was significant, it hit several small villages hardest. The high-impact zone's population -- which Najjar estimated at between 5,000 and 6,000 people -- was widely dispersed.

Iran lies on a series of seismic fault lines and experiences earthquakes almost daily. At times, they have had devastating consequences. Among the most notable was in December 2003, when a 6.6-magnitude quake devastated the ancient city of Bam -- also in southeast Iran -- and killed at least 30,000 people.

And there's been plenty of activity in recent months as well. In early November, a 4.9-magnitude earthquake in the northwestern Lorestan province injured at least 80 people, according to IRNA.