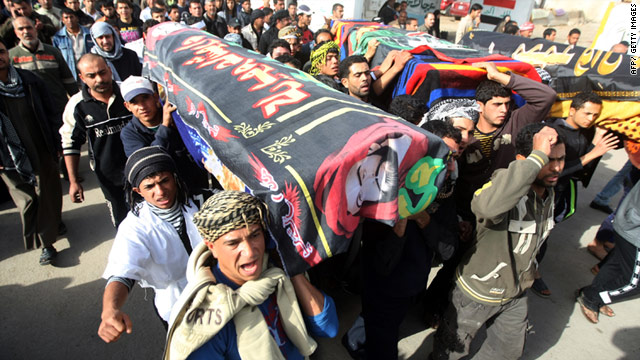 Baghdad (CNN) -- At least 10 Shiite pilgrims were killed and dozens wounded in attacks targeting them in Iraq on Tuesday evening, officials said.

In western Baghdad's Ghazaliya neighborhood a roadside bomb detonated near a gathering of pilgrims killing at least 10 and wounding 21 others, an Interior Ministry official said.

To the north of Baghdad, in Diyala province, at least 14 people were wounded when a roadside bomb detonated near a procession of Shiite pilgrims in Khalis, according to the town's mayor.

This was the third attack in as many days in the ethnically mixed Diyala province targeting Shiite pilgrims. On Sunday and Monday two suicide attacks in the province left at least five people killed and nearly two dozen wounded.

Attacks targeting Shiite pilgrims have spiked in recent days as hundreds of thousands of worshipers have been making their way to the holy city of Karbala in southern Iraq and other Shiite shrines.

Shiites in Iraq and across the world are observing a period of mourning commemorating the martyrdom of Imam Hussein, prophet Mohammed's grandson, a 7th century Imam and one of Shiite Islam's holiest figures.

Shiites in Iraq will mark the day, known as Ashura, on Friday.

Security has been increased around the shrines, especially in Karbala where the governor expects around two million pilgrims this year from Iraq and other countries.

Security officials in southern Iraq said around 28,0000 security forces have been deployed to protect the pilgrimage.

The period surrounding such events is historically a violent one with attacks believed to be carried out by Sunni extremists being a main threat.