Netanyahu: Talks should focus on 'core issues,' not settlements 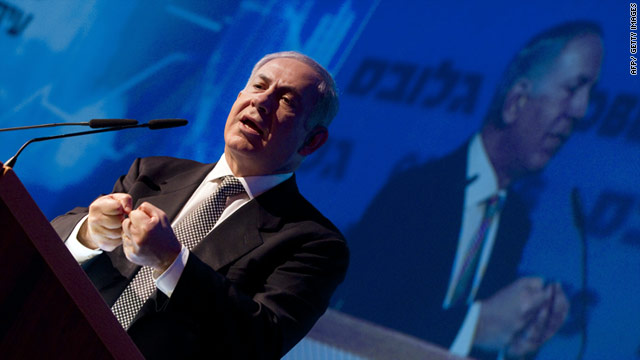 Jerusalem (CNN) -- U.S. special envoy to the Middle East George Mitchell began separate talks Monday with Israeli and Palestinian leaders in a tangible sign of the Obama administration's shifting approach to peace in the region.

Mitchell met with Israel Prime Minister Benjamin Netanyahu on Monday. He also was scheduled to meet with Palestinian leaders on his trip to the Middle East.

Last week, the Obama administration announced that it was abandoning efforts to persuade Israel to renew a settlement freeze as a precondition for jump-starting Israeli-Palestinian peace talks.

Instead, the administration plans to have each side discuss issues with Mitchell in an effort to narrow gaps that are preventing successful direct talks.

To reach peace, we need to discuss the issues that are really hindering peace, the question of recognition, security, refugees and, of course, many other issues.
--Israeli Prime Minister Benjamin Netanyahu.

Reaching for peace in Mideast

Will there be Mideast peace?
RELATED TOPICS

"In the direct talks both sides decided together to pursue a framework agreement that will establish the fundamental compromises on all permanent status issues and pave the way to a final peace treaty that remains our goal," Mitchell said during remarks before his meeting with Netanyahu in Jerusalem.

Earlier Monday, Netanyahu described the issue of settlements as a "marginal" part of peace talks and said he was glad the United States had abandoned its demand for a freeze.

"To reach peace, we need to discuss the issues that are really hindering peace, the question of recognition, security, refugees and, of course, many other issues," he said at a business convention in Tel Aviv.

Appearing on the ABC program "This Week" on Sunday, Palestinian Prime Minister Salam Fayyad indicated that progress toward a peace settlement could occur in the short-term, despite Israel's refusal to halt construction of new settlements in the West Bank and East Jerusalem.

But he said the United States may have to expand its role from Middle East peace talks facilitator to become a broker on specific core issues, and noted that the lack of a new settlement freeze erodes trust in the process.

"It may be unavoidable, actually, for the United States, acting as a broker at some point, to come in with bridging proposals so we make this happen," he said.

The Obama administration's decision to end its insistence on a settlement freeze put an end to months of grueling diplomacy which led the administration to conclude a focus on the settlements was distracting the parties from dealing with the core issues of the conflict.

In announcing the strategy, U.S. Secretary of State Hillary Clinton last week delivered a tough message that reflected the administration's impatience with both sides.

"It is no secret that the parties have a long way to go and that they have not yet made the difficult decisions that peace requires," Clinton told the Brookings Institution's Saban Forum.

Clinton said the Obama administration would push the parties in separate in-depth talks with both sides to lay out their positions "without delay, in good faith, and with real specificity."

"We will work to narrow the gaps, asking tough questions and expecting substantive answers. And, in the context of our private conversations with the parties, we will offer our own ideas and bridging proposals when appropriate."

On Monday, Netanyau said he welcomed the beginning of those discussions.

"We have a lot of work to do. We're going to work together to establish a new path to achieve a common goal, which is to get a framework agreement for peace which will ensure both peace and security and, I may add, prosperity -- a worthy objective," Netanyahu said.

"I know the United States administration, the president, secretary of state and yourself (Mitchell) are committed to it as we are and as we hope our Palestinian neighbors will participate with us to achieve in the coming months," he said.