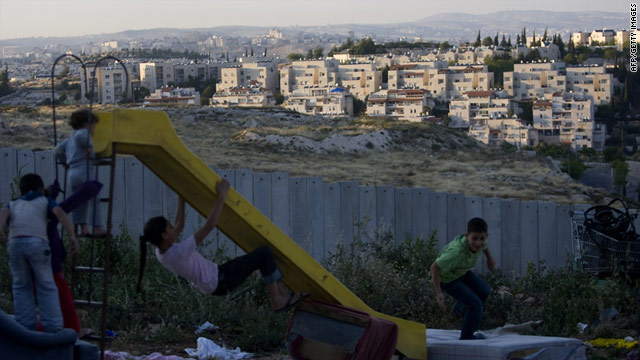 Palestinian children play on one side of a barrier wall; on the other is the Pisgat Ze'ev neighborhood of East Jerusalem.
STORY HIGHLIGHTS
RELATED TOPICS

Washington (CNN) -- The United States has abandoned efforts to convince Israel to renew a freeze on settlement construction as a precondition for renewing Israeli-Palestinian peace talks, a State Department official said Tuesday.

U.S.-Israeli talks over a possible settlement freeze have ended after what the official, who spoke on condition of anonymity because of the sensitivity of the diplomacy, called a "joint determination." A previous Israeli moratorium on new settlements in the occupied West Bank expired in September, and Palestinians have refused to return to stalled talks unless new construction stops.

Washington will continue to work with both sides on core issues, with Palestinian negotiators set to visit Washington next week, the official said. But the United States and Israel "have determined a moratorium extension at this time will not provide the best basis for direct negotiations," the official added.

Palestinian Authority negotiator Mohammed Shtayeh warned last week that an Israeli plan to build more than 600 new housing units in East Jerusalem could be the "last nail in the coffin of the peace process." Palestinian officials have been saying publicly that if the United States does not convince Israel to renew its settlement freeze, they will seek international recognition of a Palestinian state based on 1967 borders -- a move opposed by both the United States and Israel.

Israel's 10-month, self-imposed moratorium on new construction in the West Bank expired September 26, and several new projects have begun since then. Palestinian officials have condemned the settlements as an Israeli effort to colonize territory that would be part of a future Palestinian state.

Palestinian officials have also been calling for a complete halt to Jewish construction in East Jerusalem, which they consider to be their future capital. Israel annexed the eastern part of the Jerusalem in 1967 and considers the entire city to be its capital, a claim not recognized by many in the international community.

An Obama administration official, also speaking on condition of anonymity, said the United States would keep working toward an Israeli-Palestinian "framework agreement" aimed at reaching a final settlement of the decades-old conflict. Washington would engage each side separately and include all players, including other Arab states, the official said.

During the moratorium negotiations, "a number of factors made it apparent that this was not advancing the goal of creating a constructive environment" for restarting talks, the official said. Those issues led U.S. and Israeli officials to end the talks to keep from obscuring the fact that everyone wants a peace deal, the official said.