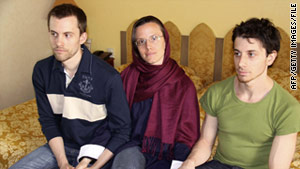 New York (CNN) -- The families of two American hikers detained in Iran for more than a year said Monday they have spoken with them on the phone for only the second time in 16 months.

Bauer and Fattal have been held in Evin Prison in the Iranian capital of Tehran for more than a year. They and a third hiker, Sarah Shourd, were arrested in 2009 after they allegedly strayed across an unmarked border into Iran while hiking in Iraq's Kurdistan region. Iran has accused them of espionage. Shourd was released on humanitarian grounds in September.

"We were relieved to speak to Shane and Josh, particularly during the Thanksgiving Holiday. We hope that their calls home bode well for their release on humanitarian grounds during this holiday season," the families said in a written statement.

Bauer's fiancee, Shourd, was with his family at the time and also spoke with him.

Earlier this month, Iran's mission to the United Nations said that the hikers would be able to speak to their families by telephone.

However, in their conversations this weekend, which lasted about five minutes each, Bauer and Fattal spoke of increasing isolation.

"They are able to spend significantly less time outside their cell in the prison yard each day and have not received the books we send them," the families said. "We are deeply concerned about their increased isolation and trust that these restrictions will be reversed."

The captive hikers said they have no information about the proceedings against them or why their case is taking so long to resolve.

"I picked up the phone and Shane's first words to me were, 'Hi Mom, this is Shane,'" Bauer's mother, Cindy Hickey, told CNN. "He sounded strong but he also sounded frustrated."

Bauer also said he is experiencing stomach problems, but was having a "good day" when he spoke with his mom, she said.

"The main point I took away from this call is their frustration about the lack of information they have and they can't understand why it's taking so long for them to be released," Hickey said.