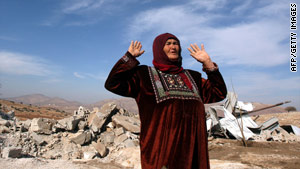 A woman reacts to the rubble of a mosque in the West Bank village of Khirbet Yarza.
STORY HIGHLIGHTS
RELATED TOPICS

Jerusalem (CNN) -- A mosque and other structures were demolished by bulldozers in a Palestinian village in the West Bank early Thursday, according to village residents.

The Israeli Civil Administration said the demolished structures did not have "the required permits in a fire area, risking the lives of the population."

Residents of the village of Khirbet Yarza said they awoke Thursday to the sounds of bulldozers as Israeli personnel moved into the area. A mosque, seven metal structures, a tent and three animal sheds were demolished, residents said.

"Almost 200 military personal and 20 military jeeps and three bulldozers arrived this morning around 5:30 to the village and started demolishing structures and the village's sole mosque," Ahmad Abu Sa'ed, a Palestinian official and resident of the area, told CNN.

The village is home to some 200 Palestinians who largely depend on livestock and farming for their livings, he said.

The mosque was built before 1967 "but recently the residents added two additional rooms to it," Abu Sa'ed said, adding that the Israelis had given demolition warnings about the construction but the matter had been in courts.

"We are surprised that even [though] there was no court order, the military took it on its own decision to demolish the mosque and structures under Israeli military rule," he said. "The problem here is not the damage cost, it is the problem that the Israelis destroyed the mosque ... with the holy Quran inside."

But the Israeli Civilian Administration said in a statement that "eight temporary structures and a building construction that were built without the required permits" were demolished after "preliminary notification orders of removal from fire areas and demolition orders. Further, the representatives of the population were summoned to present their claims before the supervision subcommittee of the Civil Administration."

"The Civil Administration will continue to maintain its duty, and will enforce the building laws in the West Bank," the statement added.

Abu Sa'ed, who estimated damage in the village to be around $90,000, insisted that despite Israeli actions, "we will remain and stay in our land."

Fathi Khidrat, coordinator of the Jordan Valley solidarity campaign, told CNN that 68 residents in the village were displaced by Thursday's demolitions.

More than 56,000 Palestinians live in the West Bank area, according to the United Nations Office for the Coordination of Humanitarian Affairs.