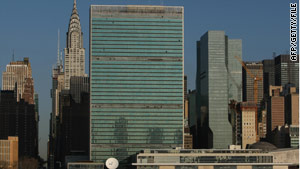 The draft resolution condemning Iran could be adopted by the UN General Assembly next month.
STORY HIGHLIGHTS
RELATED TOPICS

The General Assembly's Third Committee, which handles humanitarian issues, passed the resolution 80-44 Thursday in New York, with 57 abstaining from the vote, according to minutes from the meeting released by the United Nations.

The resolution could be adopted by the General Assembly next month.

Canadian representative John McNee sponsored the measure, arguing that there has been a "very regrettable" deterioration in Iran's human rights situation in the past year.

Iran's representative, Mohammad Javad Larijani, criticized the move, saying the United States was "the mastermind and main provocateur behind a text that had nothing to do with human rights," according to U.N. meeting minutes.

The draft resolution approved Thursday also includes the high incidence in carrying out the death penalty and increased persecution against members of the Baha'i faith in its list of human rights concerns in Iran.

It also notes "particular concern" about what it calls a failure of Iran's government "to investigate or launch an accountability process for alleged violations following the presidential elections" in June 2009.

In September, the Obama administration cited "mounting evidence" of repression of the Iranian opposition when it added more sanctions against Iranian government officials, members of the Revolutionary Guards Corps and others accused by the United States of being responsible for human rights abuses.

The sanctions, announced by Secretary of State Hillary Clinton and Treasury Secretary Timothy Geithner, block the assets of, and prohibit U.S. citizens from engaging in any business with, those on the list, which includes the head of the Iranian Revolutionary Guards Corps, the country's prosecutor general, and the ministers of welfare and intelligence.

McNee told the committee that Iran's government had not taken steps to address human rights problems, despite repeated entreaties from the international community.

"Such a persistent attitude had demonstrated a fundamental lack of respect for the United Nations and its human rights instruments and procedures. Stonings, floggings, amputations, executions of juveniles, executions by strangulation, and discrimination against women and minorities could not be ignored," McNee said, according to a summary of his remarks in the meeting minutes.

But Larijani countered that the resolution was "unprofessional and full of malicious allegations, which would take years to verify one by one." He said his country had conducted an extensive investigation after the 2009 elections. And he said that Iran's only crime was not being a "Xerox copy" of western democracy.

Representatives from Venezuela, Syria, Tajikistan, Sudan, Cuba, Bolivia and Libya also spoke against the resolution -- several of them claiming that it unfairly singled out Iran.

"Exhausted rhetoric cannot hide the fact that Iran's inhuman treatment of its people has again aroused the condemnation of the member states," Aaron Rhodes, a spokesman for the International Campaign for Human Rights in Iran, said in a statement.

The activist organization described the U.N. committee's vote as a "welcome step in the continuing effort to put a stoplight on the country's growing human rights crisis."

In a statement released after the vote, Susan Rice, the U.S. permanent representative to the U.N., said the United States welcomed the resolution.