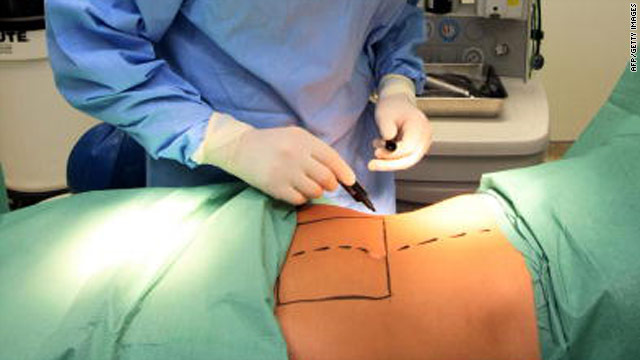 (CNN) -- While the search for inner beauty is this month drawing Muslims to Mecca for the Hajj pilgrimage, a different kind of search -- this time for beauty of a more obvious kind -- is drawing many from the Middle East to another location.

The traditional Eid holiday that marks the start of the Hajj is used by many in the region as an opportunity to travel abroad for plastic surgery. Their destination is usually Lebanon, a country whose obsession with physical perfection has transformed it into a very different kind of Mecca.

"We are very busy at this time of year -- we work like restaurants, when everyone is on vacation, we're working," Roger El Khoury, head surgeon at the Beirut Beauty Clinic, told CNN.

"Every holiday period is busy; people prefer to come here during their vacations, mainly for privacy or secrecy problems."

It also helps that a lot of Lebanese ladies have had cosmetic surgery. They are ambassadors for this kind of trend.
--Zeina El Haj, Image Concept
RELATED TOPICS

The Lebanese plastic surgery industry has flourished in recent years with surgically enhanced beauty becoming increasingly desirable among image-conscious locals. Lebanon's First National Bank even offers loans of up to $5,000 for cosmetic surgery.

With recent conflict troubles -- notably the 2006 war between Israel and Lebanon's Hezbollah militia -- seemingly behind it, the country is luring in more and more clients from further afield eager to take advantage of Lebanon's renowned medical experts, as well as its sandy beaches and snowy mountains.

El Khoury said his clinic has experienced a 25 percent increase in foreign patients over the past 12 months with clients arriving from other Arab countries in the Gulf and North Africa. There is also huge demand from Lebanese expatriates, he says.

"We don't have proper statistics, so it is impossible to tell accurately, but we estimate about 20 percent of our business is people from abroad," said Sami Saad, Lebanon's representative at the International Society of Aesthetic Plastic Surgery.

Such is the demand that a travel company has even been set up to help so-called medical tourists book their trip to Lebanon. Dubai-based Image Concept finds them the right accommodation and most importantly, the medics to perform the desired procedures.

"We're able to make their reservations, give them right addresses and hook them up with the right doctors, because we have access and a priority with many of the doctors and hospitals," said Zeina El Haj, Image Concept's founder.

El Haj said she launched her company in June 2009 with the blessing of Lebanon's tourism authorities who "loved the concept" of marketing the country's cosmetic surgery industry. Since then, she told CNN, business has boomed.

"Lebanon has doctors with a worldwide reputation. When patients approach us they often ask for a doctor they have in mind. They've already done their research.

"It also helps that a lot of Lebanese ladies have had (cosmetic surgery). They are ambassadors for this kind of trend," she added.

El Haj said her clients mainly come from the United Arab Emirates, Kuwait, Saudi Arabia and Qatar, but there are also requests from Europe, the United States and even New Zealand.

"Demand has definitely been increasing. People want to look like the stars they admire -- they want the nose, or the cheeks, or the teeth of certain celebrities. They want to look good."

According to El Khoury the procedure most requested by foreign clients is rhinoplasty -- nose jobs -- of which he completes about 200 per year. He says Lebanon's appeal for would-be patients is the affordability of its surgeons and its convenient location.

Added Saad, although Lebanon welcomed the surge in cosmetic surgery tourists, it must also warn them to be wary of unqualified surgeons trading on the country's reputation.

He advised patients to ensure any medical procedures were performed by specialists registered with the Lebanese Society of Plastic, Reconstructive and Aesthetic Surgery (LSPRAS), an internationally-endorsed body set up to regulate the industry.

"The society knows there are lots of people who come back to Lebanon with papers saying they've done work with certain plastic surgeons, but it doesn't mean anything if they haven't had any hands-on experience or worked officially in the operation room."

Saad said LSPRAS offered surgeons a highly-qualified peer group for them to fall back on in case of difficulty, but stressed that problems that resulted in legal action were few and far between.

"Litigation is not a very common thing here in Lebanon. It's a bit different from the United States -- there the result has a big importance in terms of litigation. In our part of the world, unless it's a major disaster due to neglect or poor experience, it's not a cause for lawsuits.