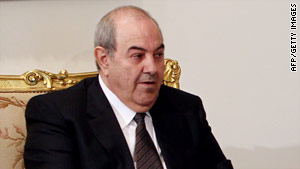 Ex-Iraqi Prime Minister Ayad Allawi says he won't accept a government role. "I will not be a part of this theater," he says.
STORY HIGHLIGHTS

Baghdad, Iraq (CNN) -- Two days after Sunni-backed politicians walked out of parliament, politicians and diplomats reported progress Saturday in the delicate process of ratifying a power-sharing deal for governing Iraq.

Officials were heartened by the return of the Iraqiya bloc to Saturday's parliamentary session. The bloc, led by secular Shiite and former Prime Minister Ayad Allawi, had threatened to shun negotiations on sharing power with Kurds and Shiites.

A compromise announced Thursday was designed to end an eight months' long stalemate that drew fears of a resurgence in sectarian and insurgent violence in Iraq.

The principal political blocs agreed Saturday to establish a committee that will work over the next month on different aspects of the deal.

Haidar al-Mullah, an Iraqiya member of parliament, said the walkout was a "misunderstanding." His bloc will take a "real part" in the government," he said, and will play the role of "positive opposition" by monitoring the performance of the government.

A Shiite lawmaker praised "the positive meeting" among the political interests.

"We emphasize to our brothers with Iraqiya that we are serious about forming a real national power-sharing government and we are serious [about creating] trust among the political components," said Hadi al-Amiri of the main Shiite bloc.

The walkout, staged by lawmakers in the Iraqiya bloc, was prompted by what it said was the failure of parliament to actually cast a vote on the power-sharing agreement.

In an interview with CNN on Friday, Allawi offered a grim prediction for the future of Iraq's government.

"We think the concept of power-sharing is dead now," he said. "It's finished."

Asked how that might affect a future government, he said, "For Iraq, there will be tensions and violence, probably."

"There are still challenges to overcome, but all indications are that the government will be representative, inclusive and reflect the will of the Iraqi people who cast their ballots in the last election," Obama said at a Friday news conference at the G-20 summit in Seoul, South Korea.

Politicians forged a compromise that left Prime Minister Nuri al-Maliki, a Shiite, and Jalal Talabani, the Kurdish president, in power for another term.

The deal is intended to create a powerful new office that was expected to be headed by Allawi, his rival. That office would be called the National Council for Strategic Policies and it would be a check on al-Maliki's power.

In his Friday interview, Allawi said that he would no longer take up that position. "I personally have made up my mind, I will not be a part of this theater."

Iraqiya also issued demands, including that legislators pass a law within 30 days forming the national council and form a committee to review the files of people illegally detained, a great concern for Sunni Arabs who have accused Iraq's Shiite-dominated government of persecuting them.

Americans and Iraqis have made a dent in al Qaeda's finances and leadership, but they know the group has a history of rebounding, he said.

"Recently, we have seen a rise in security incidents. We knew that as we approach government formation we would see an increase in activity," Austin said.

America's top soldier in Iraq said the U.S. was concerned about violence at any time period, adding "we are in a sensitive time period now."

"If the people don't consider it to be an inclusive government there may be elements within the community who would want to express their displeasure through violence, he said.

Austin offered no timetable for the withdrawal of the remaining 50,000 U.S. troops in the country.