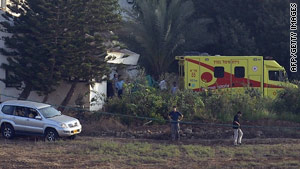 Jerusalem (CNN) -- Former Israeli prime minister Ariel Sharon, who has been in a coma since 2006, was moved from a hospital in Tel Aviv to his home Friday morning with no change in his condition.

He will spend the weekend at his home in southern Israel before returning to the Sheba Medical Center in Tel Hashomer, said Amir Marom, a hospital spokesman.

A small medical team will accompany him to his home in the Sycamore Ranch in Negev.

The hospital intends to make similar weekend trips for the next several weeks to prepare for the possibility of having him stay there permanently. The short stays will help family members adjust, Marom said.

Earlier in the week, Raanan Gissin, a former aide and close confidant of Sharon's, told CNN the family was making preparations at the home in the Sycamore Ranch in Negev for the transfer.

Gissin said a special sterile room has been created in the house. Several other modifications have been made to make it suitable for his stay, he said.

Sharon has been in a coma since he suffered a massive stroke in January 2006.

Known as "The Bulldozer," the barrel-framed former army officer was a divisive figure in Israeli politics.

As minister of defense in 1982, Sharon orchestrated Israel's invasion of Lebanon, a military operation that killed hundreds of Lebanese civilians as Israeli forces sought to destroy Palestine Liberation Organization fighters in the region.

As prime minister, he supported the expansion of the Jewish settlements, but in 2005 orchestrated a military and civilian withdrawal of settlers from Gaza.