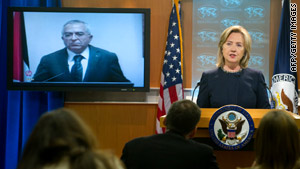 The funds will help the Palestinians close a huge budget gap, Clinton said.

"This figure underscores the strong determination of the American people and this administration to stand with our Palestinian friends, even during difficult economic times as we have here at home," she told reporters at a press briefing.

Palestinian Authority Prime Minister Salam Fayyad, who appeared at the briefing via a remote video conference from Ramallah, thanked Clinton for the assistance, saying, "The timeliness could not be better."

Clinton said the announcement brings the total of U.S. direct budget assistance to the Palestinian Authority to $225 million this year. With the inclusion of money for security, water, health care, education, and other services, the overall American investment to the Palestinians this year totals nearly $600 million, she said.

A U.S. official said the additional $150 million is "new money" advanced from 2011 funds approved by Congress.

The money was "front-loaded" to help the Palestinians to sustain their government amid their urgent budget problem, the official said.

A senior administration official said the United States is committed to pursuing negotiations that lead to an agreement that ends the Israeli-Palestinian conflict, while simultaneously helping the Palestinians build governing institutions so that they will be ready to effectively govern in the event of an agreement allowing for a Palestinian state.