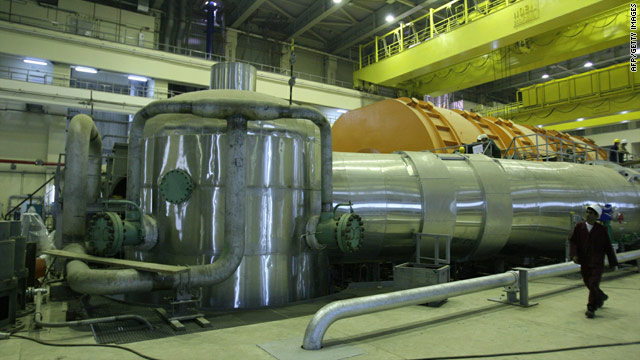 The inside of the reactor at the Russian-built Bushehr nuclear power plant in southern Iran.
STORY HIGHLIGHTS
RELATED TOPICS

Iran made the offer through Turkey, a potential host for the talks, he said.

The United States and other countries believe Iran is trying to develop the technology to build a nuclear bomb, but Tehran consistently denies its program has a military aim.

Speaking at the Halifax International Security Forum in Canada, the South Carolina senator told reporters that there will come a point where Iran's nuclear program will reach the state that a conventional limited air strike "won't take them out.

"We're probably even past that point," he said.

"Instead of a surgical strike on their nuclear infrastructure, I think we're to the point now that you have to really neuter the regime's ability to wage war against us and our allies. And that's a different military scenario. It's not a ground invasion but it certainly destroys the ability of the regime to strike back," said Graham, one of his party's top voices on defense.

The talks between Iran and the so-called P5+1 group have been on hold for more than a year, but Iran has signalled recently it is ready to come back to the table.

IranianPresident Mahmoud Ahmadinejad set out a hard line in October, saying Iran is ready to hold talks, but warning that his country won't yield any of its international rights to peaceful nuclear energy development, according to recent reports by state media.

"Holding talks with Iran is the best choice for you," Ahmadinejad said at a rally in Ardebil in northwestern Iran in early October, according to state-run Press TV. "You have no other option. All the other ways are closed. You know the fact very well."

In September, Ahmadinejad said an Iranian representative would meet with the "P5+1" group. The group is made up of the five permanent members of the United Nations Security Council -- the United States, Britain, France, China and Russia -- along with Germany.

Nuclear talks between Iran and the six powers have been stalled since October 1, 2009, when the two groups last met in Geneva, Switzerland.

Iran's latest move may be a sign that Tehran is feeling the bite of increased sanctions imposed in recent months to force them to return to talks.

Iran is now subject to four sets of U.N. sanctions, while the United States and the EU have also imposed separate penalties on Iran over its refusal to stop enriching uranium.

Still, Ahmadinejad has said Iran is not weakening in its resolve. "They thought they can weaken the Iranian nation through imposing sanctions and posing threats, but Iranians have showed integrity, convergence and strength."