37 wounded in attacks across Iraq 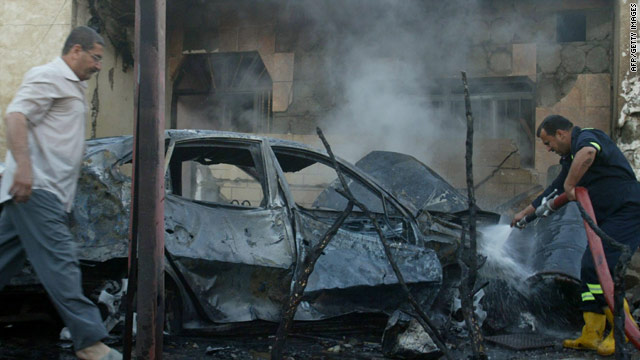 A firefighter douses a car with water Saturday after one of three car bombings in Kirkuk, Iraq.
STORY HIGHLIGHTS
RELATED TOPICS

Baghdad, Iraq (CNN) -- At least 37 people were wounded Saturday in attacks in the Iraqi capital and the northern city of Kirkuk, authorities said.

Separately, at least 10 others were wounded in attacks in the Iraqi capital of Baghdad.

Seven people, including two civilians, were wounded when a roadside bomb went off in the western part of the city, the Interior Ministry said. The blast occurred after another bomb explosion set a liquor store ablaze. The roadside bomb detonated as emergency officials responded to the scene.

Elsewhere in Baghdad, two traffic officers were wounded when a rocket struck a busy area in the center of the city, the Interior Ministry said. Also, a bomb attached to a civilian vehicle detonated, wounding the driver.

And three rockets struck Baghdad's heavily fortified International Zone on Saturday morning, according to Iraq's Interior Ministry. There were no reports of casualties or damage.

While the widespread daily violence across Iraq has dropped over the past two years, more than 150 Iraqis have been killed in attacks over the past week.

On Tuesday, 64 people were killed and hundreds were wounded in more than a dozen bombings that struck mostly Shiite parts of the capital.

Tuesday's bombings were among the largest scale attacks since the U.S.-led invasion in 2003. Seventeen Baghdad neighborhoods were struck by more than a dozen bombs, most of which were car bombs.

And at least 58 people died in the siege of a Baghdad church on Sunday by fighters affiliated with al Qaeda in Iraq -- one of the worst attacks of the war against Iraq's dwindling Christian minority.