Al Qaeda's No. 2 man calls for revenge over convicted scientist 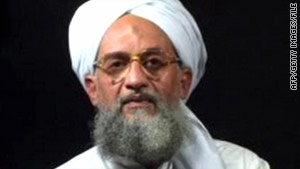 (CNN) -- A new audio message purportedly from al Qaeda's second in command surfaced Thursday on radical Islamist websites, calling for revenge for a Pakistani scientist convicted of attempting to kill Americans in Afghanistan.

A U.S. court sentenced Aafia Siddiqui to 86 years in prison in September after an American jury convicted her this year on seven charges, including attempted murder and armed assault on U.S. officers.

In Thursday's audio recording, the speaker identified as Ayman al-Zawahiri says his message -- titled "who will come to the aid of scientist Aafia Siddiqui" -- is two-fold.

'In regards to my message to America, I say, go ahead and judge, because you are only judging yourselves. ... Attack others because in return, you will only be attacking yourselves," he says. "By the lord of heaven and earth, we will fight you until the hour of the judgment day comes or until you stop your crimes against us."

He goes on to address Pakistan: "I want to say these few words because now this is the time for action. Your government and the commanders of your army have transformed you into a people without a dignity, without honor and without pride and even without any value whatsoever. The Americans and their crusader allies occupy your country. They kill your people, they destroy your villages and they imprison your women. Is there any more disgrace and humiliation than this?

"The path is clear and quite obvious. Whoever wants to free Aafia Siddiqui and revenge for her honor against those who assaulted her and assaulted every other Muslim woman, let them join the ranks of the mujahedeens and let them support them and be part of them because there is neither pride nor dignity without seeking jihad."

In 2008, Siddiqui fired a rifle at two FBI agents, a U.S. Army warrant officer, an Army captain and military interpreters when they entered a room where she was being held in central Afghanistan. She did not hit anyone but was injured when the warrant officer returned fire.

Afghan police had arrested her outside the Ghazni provincial governor's compound after finding her with bomb-making instructions, excerpts from the "Anarchist's Arsenal," papers with descriptions of U.S. landmarks and substances sealed in bottles and glass jars, according to a September 2008 indictment.

The indictment said Siddiqui had "handwritten notes that referred to a 'mass casualty attack'" listing several locations in the United States, and "construction of 'dirty bombs.' "

At her sentencing last month, Siddiqui said, "I don't want any violence in my name. If you do anything for me, please educate people about Islam because people don't understand that it is a religion of mercy."

Demonstrations against her conviction had broken out in Pakistan, where her case had become a cause célèbre.