Blasts in Baghdad kill at least 64 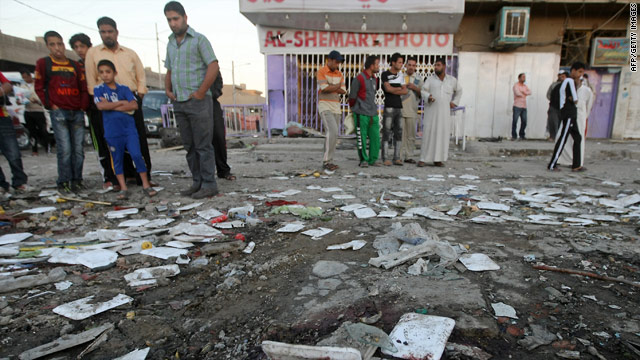 Iraqis inspect damage at a market on November 3, 2010, one day after a blast in the Sadr City district of Baghdad.
STORY HIGHLIGHTS

The blasts across the capital Tuesday included 14 car bombs, two roadside bombs and mortar attacks in at least 17 neighborhoods, most of them in Shiite areas, police said.

In an earlier report, police said there had been three roadside bombs and a sticky bomb: a device typically placed on a vehicle.

Explosions struck the Shiite neighborhoods of Kadhimiya in the northwest; Amil, Bayaa and Shulaa in the southwest; Ur and Zuhour in the northeast; Sadr City, Kamaliya and Amin in the east; and Abu Dhsir in the southern part of the city.

U.S. military advisers went to some of the explosion sites with Iraqi security forces, the military said in a statement.

During the height of the Iraq war, sectarian violence tore through Baghdad on a daily basis in Sunni and Shiite neighborhoods.

On Tuesday, the Committee to Protect Journalists protested Iraq's move -- carried out Monday -- to close Al-Baghdadiya TV's offices in Baghdad and Basra.

The decision came after the Cairo, Egypt-based satellite channel broadcast demands of gunmen who attacked a church in Baghdad on Sunday. The hours-long standoff ended after Iraqi security forces stormed the Sayidat al-Nejat church.

In all, 58 people died, and 75 others were wounded; most of the casualties were women and children, the officials added.

The Al-Baghdadiya bureau chief in Cairo, Abdelhamid al-Saih, told the journalists group that the shutdown was illegal since there was no judicial order and that he believed authorities were using the broadcast as a pretext to close the offices because the channel had previously given Iraqis the opportunity to criticize the government.

"We are concerned by the closure of Al-Baghdadiya TV and demand that [the government's Communications and Media Commission] explain under what authority it has stormed the station's offices and censored it," said Mohamed Abdel Dayem, Middle East and North Africa program coordinator for the Committee to Protect Journalists. "We call on the authorities to allow the station to resume its operations immediately."

According to the committee, the government commission said in a statement that the attackers had "contacted the station and selected it to be the exclusive platform for their inhumane practices with the purpose of disrupting Iraq's national unity and to inflame religious discord."

It said, "the station's broadcast of demands 'amounts to incitement to violence' and that Al-Baghdadia's coverage was not objective, creating a threat to the military operation by providing attackers with information about ongoing operations to rescue the hostages."