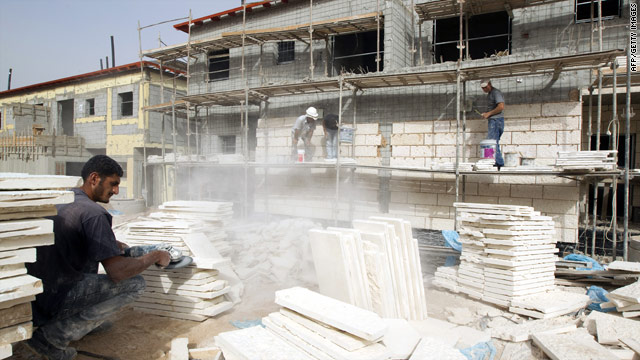 (CNN) -- Palestinian leader Mahmoud Abbas on Thursday renewed his call for an end to Israeli settlement construction in the West Bank as a prerequisite to resume stalled peace talks, and said appealing to the United States or United Nations was among the Palestinian options to end the standoff.

In response, Israeli Prime Minister Benjamin Netanyahu reiterated earlier statements that appealing to international organizations wouldn't be in the best interests of the peace effort.

"We expect (of) the Palestinians that they will adhere to their obligation to renew direct peace talks in earnest without prior obligations," Netanyahu said. "All attempts to sidestep direct negotiations through international bodies will not move the negotiations in the direction of true

and lasting peace between our two peoples, only direct talks."

Abbas, speaking at a news conference Thursday with Egyptian foreign minister Ahmad Abu al-Gheit, said it is premature to appeal to the United States or the U.N. Security Council while efforts to win a new settlement freeze are still under way.

But he said such steps are among the options Palestinians are considering in response to the "unacceptable" resumption of settlement activity on land Palestinians consider part of their future state.

Alluding to recent warnings to Palestinians by Netanyahu not to take unilateral steps, Abbas characterized Israeli settlement activity as blatantly unilateral actions that have delayed any peace agreement.

Some 600 new housing units have begun construction in the West Bank since the freeze expired, according to settlement monitoring group Peace Now.

Separately the Israeli government issued tenders for new home construction in the East Jerusalem neighborhoods of Pisgat Ze'ev and Ramot, where many Jewish residents are already located. The

area, seized by Israel during the Six Day War in 1967, is part of what Palestinians want for the capital of their future state.