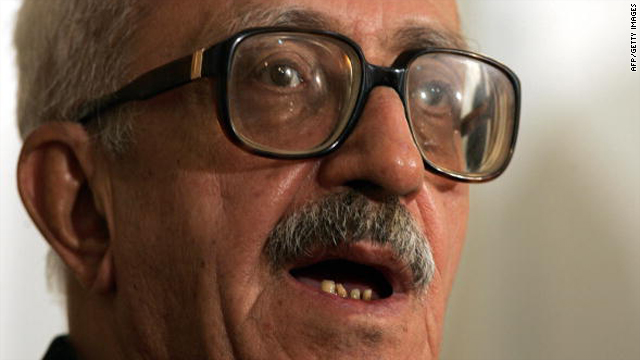 Baghdad, Iraq (CNN) -- Tariq Aziz, one of the best-known faces of the Iraqi government for more than two decades, was sentenced to death Tuesday by the Iraqi High Tribunal for his role in eliminating religious parties during Saddam Hussein's regime, court officials told CNN.

His family was shocked by the verdict, his daughter told CNN.

They had no idea he was going to be sentenced Tuesday, Zainab Aziz said from Amman, Jordan.

"Until last week they were hearing new witnesses in this case," she said, criticizing both the verdict itself and its timing.

"My father served his country for more than 22 years. He delivered himself to the U.S. Army [after the fall of Hussein] because he wasn't afraid. He didn't do anything wrong. He served his country," she told CNN International's "iDesk" program.

"He has been wronged," Zainab Aziz said.

"He feels that way and we feel that way because we know he didn't do anything wrong, he only served his country as a foreign minister and that didn't include anything of these bloody crimes he's been tried for right now," she argued.

"I think it's very unfair," she said.

She said her father had little expectation that an appeal would help.

"I don't think he has any hope of coming out" of prison, she said, adding that he is "old and frail.

"He doesn't have any hope, but he is really happy that we are OK, that we are doing fine," she said. "That is his only consolation."

Badi Arif, an attorney who used to represent Aziz, said there is a political motive behind the death sentence.

"Mr. Aziz used to always tell me, 'They'll find a way to kill me, and there is no way for me to escape this,'" Arif told CNN. "But from a legal perspective, this sentence is wrong; this is illegal and this is unexpected."

In March 2009, Aziz was sentenced to 15 years in prison in connection with the 1992 executions of 42 merchants.

Aziz was deputy prime minister from 1981 to 2003, also holding the post of foreign minister for part of that time.

Amnesty International urged Iraq not to carry out the sentences, even as it acknowledged the brutality of Hussein's regime.

"Saddam Hussein's rule was synonymous with executions, torture and other gross human rights violations, and it is right that those who committed crimes are brought to justice," said Malcolm Smart, Amnesty International's director for the Middle East and North Africa.

"However, it is vital that the death penalty, which is the ultimate denial of human rights, should never be used, whatever the gravity of the crime," he said in a written statement.

"This is not the most adequate way to promote reconciliation and reconstruction of justice and peace in a country that has suffered so much," he said.