Just ask Mummy: Cancer the least of their worries 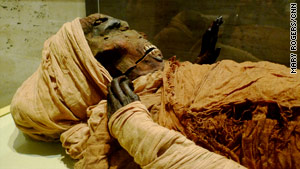 One of the royal mummies at the Egyptian Museum. For many royals diet and exercise played a part in death.

Cairo, Egypt (CNN) -- Just imagine: a world without cancer. It's a tantalizing thought, recently floated by researchers at Manchester University in the UK.

That world may well have existed, but in the distant past, according to their survey of hundreds of mummies from Egypt and South America. The researchers found that only one mummy had clearly identifiable signs of cancer.

The study suggested that industrialization, pollution and the ills of modern life are to blame for the epidemic of cancer now seen sweeping around the globe.

Monday morning I went to the mummy room in Cairo's cavernous Egyptian Museum to have a look for myself. They looked pretty rough, more than 3,000 years after their prime, and not being an expert I just gawked like the tourists who were filing through.

But top Egyptologist and head of the Egyptian Supreme Council of Antiquities Zahi Hawwas, never at a loss for words, said the Manchester University study focused on non-royal mummies, and left out the people who lived the good life.

"If you were a pharaoh," he told me, "you would get lots of diseases, because you ate well, you ate meat all the time, it's fat food, and you never took care of your health."

He pointed to the desiccated mummy of the famed Queen Hatshepsut (ca 1508-1458 BC), who masqueraded as a male pharaoh due to popular prejudices at the time. Poor Queen Hatshepsut suffered from arthritis, diabetes and bad teeth, and is believed to have died of bone cancer.

Ancient Egyptian physicians were renowned for their skill, but those skills only went so far.

Cancer or no cancer, the Grim Reaper came often and came early in Ancient Egypt. Although the pharaohs and others at the top of Egypt's social pyramid tended to live longer, the average life expectancy for men was less than 40, and women tended to die even younger because of childbirth.

The common folk survived on simple fare, said Zahi: "It was a good diet because they were eating bread and garlic and drinking beer, beer all the time."

How the ancient world dealt with cancer

Which to some might sound like an attractive set of staples, but as Salima Ikram, an Egyptologist at the American University in Cairo, points out, the lot of the ordinary Egyptian was hardly idyllic.

"They suffered from all kinds of parasitic diseases, including schistosomiasis (a water-borne disease still common in Egypt). And you can see it depicted in tomb decorations, because the men, particularly men who deal with water, particularly fishermen and collectors of reeds, you see them with distended bellies, enlarged penises, and receding hair lines."

There was little regard for workplace safety. Back then, you worked, then you died.

"If you're working in a tomb, for example, all that dust is going to get to you, as you grind down limestone, as you carve statues, as you inhale the smoke either from cooking fires or little lamps that help illuminate your work as you build temples or decorate them," says Dr Ikram. "So all these things were real killers for the ancient Egyptians."

Other hazards, she said, included venomous snakes and stampeding hippos, the latter reincarnated in the taxi drivers of modern Cairo who, I suspect, have a higher kill ratio than their four-legged antecedents.

So, yes, cancer may not have been a common cause of death in Ancient Egypt. There were plenty of other fatal options.

And as much as I'd like to jump into a time machine and see what life back then was really like, I think I'll take my chances with modern Egypt, taxi drivers notwithstanding.