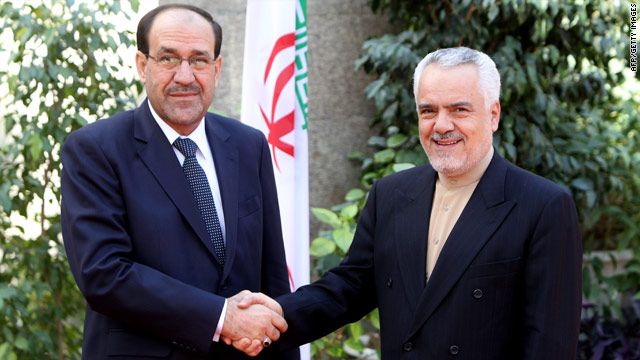 Baghdad, Iraq (CNN) -- With the political future of Iraq still hanging in the balance, Prime Minister Nuri al-Maliki, leader of a coalition of powerful Shiite parties backed by Iran, met with leaders of the Islamic republic in Tehran on Monday.

Al-Maliki's opponent, who leads a more secular coalition, has accused Iran of fomenting unrest in Iraq.

Iran, in turn, urged Iraq to quickly form a new government and blamed the United States for the insecurity, according to state-run Press TV.

"Despite relative stability in Iraq, the country is still suffering from insecurity and part of this insecurity is resulted from the pressures that are exerted by some powers whose political interests lie in creating insecurity in Iraq," said Iran's Supreme Leader Ayatollah Ali Khamenei.

The region is "falling victim" to terrorist groups backed financially by Iran, he said.

Khameini called Iraq a "vigilant nation" and said there was "not a possibility of another domination over the country whatsoever."

Iran's influence has become a key point of debate as al-Maliki battles to keep his job. His party won 89 parliamentary seats in the March election, losing by a narrow margin to Allawi's party, which won 91 seats.

To form a government, a 163-seat majority out of 325 seats is needed. Since March, al-Maliki and Allawi have been jockeying for support. But almost eight months later, Iraq's political crisis remains unresolved.

But al-Iraqiya, Allawi's mainly secular and cross-sectarian bloc, has already said it won't participate in any government headed by al-Maliki.

Allawi told Zakaria that an environment conducive to terrorism exists in Iraq. Besides the lack of government, Allawi cited a stagnant economy, high unemployment and inadequate services.

"Definitely in Iraq I can say categorically that Iran is trying even to bring about change to the political process according to their wishes and requirements," Allawi said.

Zakaria asked Allawi if he suspected that a group backed by Iran was responsible for last week's roadside bombing that killed four members of his Iraqiya party. Allawi didn't assign blame to Iran, but said that there are many forces trying to influence the situation in Iraq.

Other countries in the Middle East are supportive of a strong, stable Iraq, he said.

"I don't believe that there are leaders in the region who are trying to fuel extremism and bring about sectarianism. Unfortunately, only Iran," Allawi said.

Later Sunday, Allawi told CNN in a separate interview that he didn't think the political stalemate in Iraq will end soon.

"What we are arguing for is power-sharing," he said. "The constitution is wrong when it put all authority within the prime minister's sphere."

He said that al-Maliki has not committed to sharing authority..

"Now without him committing himself is very difficult to work with him and it is unacceptable," he said. "It's not a matter really of who is the prime minister and who is the president. It's a matter of whether the issues that we have addressed are being [met]."