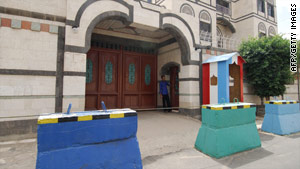 (CNN) -- Yemen was carrying out airstrikes and a ground campaign Sunday against al Qaeda in the Arabian Peninsula in the southern part of the nation, according to a government official.

"Yemen's security forces have been in engaged in a ground and air campaign for two days in Abyan province against al Qaeda," said the official, who is not authorized to speak to the press about the campaign. The official said the battle is fierce and bloody and is part of a larger low-intensity conflict with AQAP.

The airstrikes began on Saturday and were continuing on Sunday, the official said. "This is no doubt in retaliation to an attempt by al Qaeda in the Arabian Peninsula to kill the governor and junior regional security officials this past week."

At least six militants have been killed, the official said, as the airstrikes targeted militant gatherings in the province's Lawdar and Moudeya districts.

"Western embassies in Sana'a were put on high security alert -- especially the British and American embassies," the official said, referring to Yemen's capital. "The government of Yemen has increased security outside those embassies and they were heavily fortified in fears of AQAP retaliation."

Residents of Sana'a have been hearing the fighter jets as they fly south toward the operations, the official said.

Tribesmen from Abyan province are supporting the provincial governor after AQAP killed his brother in an ambush aimed at assassinating the governor himself, the official said.

Saturday night, two suicide bombers were killed after their vehicle, which was rigged with explosives, attempted to ram a military motorcade in Moudeya, the official said. The car exploded after Yemeni forces shot at the suspicious vehicle with high-caliber machine guns.

On Friday, a man accused of financing al Qaeda in Yemen -- another name for AQAP -- was arrested at Sana'a International Airport. Yemen's Ministry of Interior said Saturday the suspect, Saleh al-Raimi, is a Yemeni expatriate living in Saudi Arabia and that he was "wanted for financing al Qaeda terrorist acts in Yemen."

Also Friday, the Interior Ministry offered a reward of 20 million Yemeni riyal (about U.S. $100,000) for information leading to the capture of eight suspected members of al Qaeda in Yemen. The nation's official Saba news agency identified the eight, urging the public to cooperate and warning citizens not to shelter any of the suspects.

And a wanted al Qaeda in Yemen member turned himself in to Saudi Arabian authorities on Friday, Saudi Arabia's official Saudi Press Agency reported, citing a security spokesman at the country's Ministry of Interior. The statement added that the man, Jaber bin Jibran bin Ali al-Afifi, a former Guantanamo Bay detainee, had rejoined al Qaeda in Yemen after he had returned from captivity.

In the past week, AQAP is suspected of being behind three separate attacks that have killed at least two Yemeni security officials, according to a government official.

Last week also saw the release of an audio recording purported to be from Qassim al-Rimi (also known as Abu Hurira al-Sanaei), the leader of al Qaeda in the Arabian Peninsula, that was posted on radical militant websites. The speaker promised that Yemen's president, Ali Abdullah Saleh, would be punished "for his crimes" and announced that a new army would rid the country of "crusaders and apostates." CNN could not verify the authenticity of the recording.