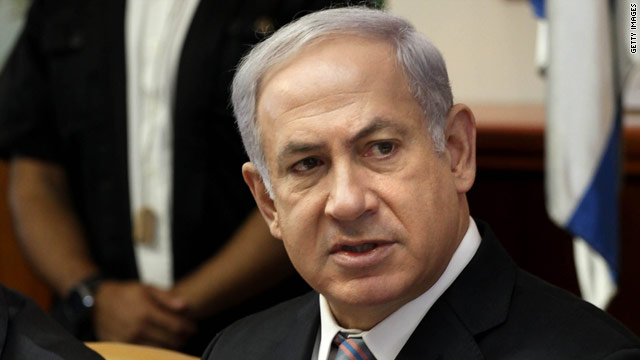 "Democracy is the soul of Israel and we cannot do without it," Prime Minister Benjamin Netanyahu said Sunday.
STORY HIGHLIGHTS
RELATED TOPICS

Jerusalem (CNN) -- The Israeli Cabinet has approved an amendment to a citizenship law that requires new citizens to declare their loyalty to a "Jewish and democratic state," the prime minister's office said Sunday.

A statement from Prime Minister Benjamin Netanyahu's office confirmed vote, saying 22 ministers voted for the change and eight voted against it.

Now that the proposal has passed the Cabinet, it will be taken up by Israel's parliament, the Knesset, for passage into law.

Before his government's weekly Cabinet meeting, Netanyahu made a forceful plea Sunday for changing the nation's Citizenship Law. He challenged criticism that the revision is undemocratic and could harm relations with the minority Arab population.

Netanyahu cited the nation's Declaration of Independence, which says Israel is both the "national state of the Jewish people" and a democratic state "in which all its citizens -- Jewish and non-Jewish -- enjoy fully equal rights."

"Democracy is the soul of Israel and we cannot do without it," Netanyahu said, according to a statement from his media adviser.

He noted that Israel was the only democracy in the Middle East, and that "there is no other Jewish state in the world."

"The combination of these two lofty values expresses the foundation of our national life and anyone who would like to join us needs to recognize this," Netanyahu said.

Netanyahu announced last week he would push now for adding language to Israel's citizenship and entry law that would declare a new citizen's allegiance to "a Jewish and democratic state."

Another Arab Knesset member Ahmed Tibi, from the Ra'am-Ta'al party, criticized the move as well, saying that "the values of Jewish and Democratic cannot be in the same definition because democracy is the equality of all the citizens."

"But an ethnic definition as Jewish is the preference of the Jew over that of the Arab and therefore it fixates an inferior status to 20 percent of the population," Tibi said.

In describing the reasons for the timing of the proposed change of language, Mark Regev, a spokesman for Netanyahu, said, "What we are asking others to accept we have to demand of ourselves" -- a reference to the recent Israeli government demand that Palestinians recognize Israel as the nation state of the Jewish people.

The language of the new oath would not apply to immigrants coming to Israel under what is called the "Law of Return" that allows converted Jews and people with Jewish ancestry the right to settle in Israel and acquire citizenship.

Israel's right-wing coalition government is divided over the proposal. Minister of Social Affairs Yitzhak Herzog from the Labour Party, which questions the change, told Israeli Army radio that political pressure was behind Netanyahu's push for the move.

The problem with the amendment, Herzog said, "is not in the essence but the influence this will have on the dialogue with the Arab minority in Israel."

Recently resumed peace talks with the Palestinian leadership appear to hinge on whether Israel will extend a moratorium on construction in Jewish settlements in the West Bank. The moratorium expired on September 26.

The right-wing Yisrael Beiteinu party, also a member of the coalition government, welcomed the proposed change and denied it had anything to do with a possible extension of the settlement freeze.

"It is definitely not connected to the settlement freeze," said David Rotem, a Knesset member for the party. "We have been talking about passing this law even before the elections and it is part of our coalition agreement."

Before the changes were approved by the Cabinet, Rotem told CNN the oath was "very similar to the citizenship law in the United States, England, Australia, France and many other countries who all demand a declaration of loyalty."