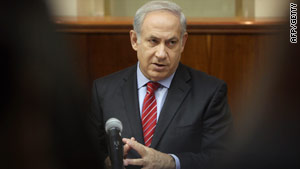 Jerusalem (CNN) -- In a move likely to fuel tensions with its minority Arab population, Israel moved a step closer to passing a law that would require new citizens of the country to declare their loyalty to a "Jewish state."

In a statement released Wednesday night, Israeli Prime Minister Benjamin Netanyahu announced his support for adding language to Israel's citizenship and entry law that would declare a new citizen's allegiance to "a Jewish and democratic state."

"The State of Israel is the national state of the Jewish people. This principle guides government policy, both foreign and domestic, and is a foundation of Israeli law," Netanyahu declared in the statement.

"This principle finds expression in the phrase 'a Jewish and democratic state.' It is fitting that this principle should also appear in the loyalty oath taken by those seeking to become naturalized Israeli citizens."

Arab Knesset member Ahmed Tibi from the Ra'am-Ta'al party criticized the move, saying that " the values of Jewish and Democratic cannot be in the same definition because democracy is the equality of all the citizens.

But an ethnic definition as Jewish is the preference of the Jew over that of the Arab and therefore it fixates an inferior status to 20 percent of the population."

In describing the reasons for the timing of the proposed change of language, Mark Regev, a spokesman for Netanyahu, said, "What we are asking others to accept we have to demand of ourselves" -- a reference to the recent Israeli government demand that Palestinians recognize Israel as the nation state of the Jewish people.

In an updated statement, Netanyahu said "Israel is a democratic state that gives full civil equality to all its citizens. We uphold this in our foreign and domestic policy, and in the peace negotiations."

The language of the oath would not apply to immigrants coming to Israel under what is called the "Law of Return" that allows converted Jews and people with Jewish ancestry the right to settle in Israel and acquire citizenship.

Minister of social affairs Yitzhak Herzog from the Labour Party, a junior partner in Netanyahu's right-wing coalition government, told CNN that he is asking Labour leader Ehud Barak to urgently convene the party's ministers in order to discuss halting the proposed amendment to the citizenship law.

In an interview with Israeli Army radio, Herzog said discussions about possible changes to the law were first brought up two months ago, but that there was no agreement on the language change.

He said now there is political pressure to cater to a certain group, suggesting the prime minister was catering to his right-wing coalition members.

The problem with the amendment, Herzog said, "is not in the essence but the influence this will have on the dialogue with the Arab minority in Israel."

The right-wing Yisrael Beiteinu party, which is also a member of the coalition government, welcomed the proposed change. David Rotem, a party and Knesset member, told CNN "this law is very similar to the citizenship law in the United States, England, Australia, France and many other countries who all demand a declaration of loyalty."

In response to a question about whether the proposed amendment is connected to Netanyahu's efforts to persuade Yisrael Beiteinu leader and Foreign Minister Avigdor Liberman to accept an extension of the settlement freeze, Rotem replied "it is definitely not connected to the settlement freeze, we have been talking about passing this law even before the elections and it is part of our coalition agreement."

As a leader and candidate of the nationalist Yisrael Beiteinu party in 2008 elections, Liberman ran on the campaign slogan "Without loyalty, there is no citizenship," a controversial call directed toward the Israeli Arab population.