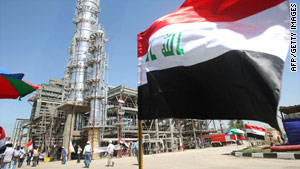 The Iraqi flag flutters during the opening of the Al-Dora refinery complex in Baghdad last month.
STORY HIGHLIGHTS

The OPEC figures are about 28 billion barrels higher than previous estimates.

At $81 a barrel, about what oil was trading at early Monday, the added reserves would be worth about $2.27 trillion.