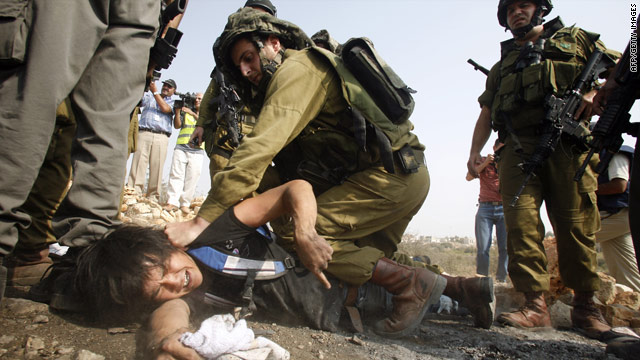 Israeli soldiers clash with Palestinian and Israeli demonstrators at a protest against Jewish settlements in the West Bank village of Beit Omar on Saturday.
STORY HIGHLIGHTS

Revava, West Bank (CNN) -- Israeli settlers cheered Sunday's expiration of a moratorium on building new settlements in the West Bank, as Israel's prime minister urged Palestinians not to walk away from newly resumed peace talks over the lapsed restrictions.

Israel "is ready to hold continuous contacts in the coming days in order to find a way to continue the peace talks between Israel and the Palestinian Authority," Israeli Prime Minister Benjamin Netanyahu said in a statement from his office shortly after the moratorium expired at midnight Sunday (6 p.m. ET). He asked Palestinian Authority President Mahmoud Abbas to "stay in the talks and, with me, continue on the road towards peace."

"I say to President Abbas: For the future of both our peoples, let us focus on what is really important," Netanyahu said. "Let us proceed in accelerated, sincere and continuous talks in order to bring about an historic peace framework agreement within one year."

Palestinian officials have said that if building resumes on territory they consider part of a future Palestinian state, they will walk away from the latest negotiations aimed at resolving their decades-old conflict with Israel. Speaking at the United Nations on Saturday, Abbas said Israel "must choose between peace and the continuation of settlements," but there was no immediate Palestinian response to the expiration.

Ahead of the expiration, settlers in the West Bank staged a rally to show support for continued construction, as the moment neared. They were joined by members of Israel's parliament, the Knesset, as they symbolically "broke ground" in the area around the settlement of Kiryat Netafim.

"For the last 10 months we have treated (West Bank settlers) like second-class citizens," said Knesset member Danny Danon, a member of Netanyahu's Likud party. "We discriminated against the Jewish people in Judea and Samaria, and today we finish that. Today we continue to build to continue with the Zionist vision in Judea and Samaria," he said, using the Israeli terminology for the West Bank.

About 1,500 people attended the rally, releasing white-and-blue balloons that they said represented the 2,000 buildings they intend to build now.

Netanyahu had called on settlers to show "restraint and responsibility" as the moratorium came to an end, "exactly as they showed restraint and responsibility throughout the months of the suspension of the building." But according to Peace Now, an Israeli settlement watch group, plans for thousands of houses are ready to go, and construction will start as soon as the freeze is lifted, and the Palestinian representative for settlement watch in the West Bank said 20 new caravan homes were built by Saturday -- before the moratorium expired.

Israelis and Palestinians are in the initial rounds of face-to-face peace talks after an 18-month hiatus, and the United States has pushed Israel to extend the restriction. In the past few days, Netanyahu has spoken to U.S. Vice President Joe Biden, U.S. Secretary of State Hillary Clinton and former British Prime Minster Tony Blair about working out a compromise, an Israeli government source said.

"Our policy on settlement construction has not changed," the State Department said announced Sunday night. "We remain in close touch with both parties and will be meeting with them again in the coming days. We remain focused on the goal of advancing negotiations toward a two-state solution and encourage the parties to take constructive actions toward that goal. "

At the United Nations and in Washington, talks among U.S., Israeli, Palestinian and other officials continued up to the last minute. Clinton spoke with Netanyahu twice on Sunday, a senior State Department official told CNN, and talked with Blair, the representative of the U.N.-backed Mideast Quartet.

Another senior diplomatic source said Israel's chief negotiator, Yitzhak Molcho, has been in and out of meetings with White House officials in New York. His Palestinian counterpart, Saeb Erakat, stayed behind after Abbas left New York to work with U.S. and Israeli negotiators.

Senior Arab diplomats have said that Arab states have agreed they will take their time to study whatever decision Netanyahu made. They are looking to meet October 5 to formulate a joint response.

Speaking on ABC's "This Week," President Barack Obama's top adviser, David Axelrod, avoided discussing any details regarding the lifting of the moratorium. But he called the ongoing talks between Israel and the Palestinians "an unparalleled opportunity."

"Everyone understands that these talks are absolutely crucial," he said. "We're at an important junction."

On CNN's "Fareed Zakaria GPS," Israeli President Shimon Peres said it's a "fair possibility" that the negotiations will result in a two-state solution.

"Honestly, for me, the end of the conflict is needed because it's not a matter of political wisdom. It's a matter of principles," he said. "We, the Jewish people, were not born to govern other people. It stands against everything that we stand for. For me it's a moral test. We think the better the Palestinians will have it, shall be better for us."