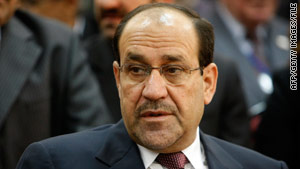 Baghdad, Iraq (CNN) -- The Iraqi bloc that eked out a victory in the March 7 national election said it won't participate in any government headed by Prime Minister Nuri al-Maliki.

The pronouncement highlights a failure to form an Iraqi government, and Iraqi officials fear that insurgents would take advantage of the political vacuum by trying to reignite the Sunni-Shiite sectarian bloodshed that gripped Iraq for years.

The group said al-Maliki has been attempting to undermine al-Iraqiya.

Al-Iraqiya won 91 seats in March, beating out al-Maliki's State of Law Alliance by two votes. To form a government, a 163-seat majority of 325 seats in parliament is needed, but neither bloc has been able to form a governing coalition.

Both have had contact with the Iraqi National Alliance -- also a strong Shiite movement. A bloc made up of that group and al-Maliki's State of Law Alliance has recently emerged, but al-Iraqiya also rejects that entity, called the National Alliance.

"Al-Iraqiya will not acknowledge the so-called 'National Alliance,' and its consequential attempts to implement political sectarianism," al-Iraqiya said.

At the same time, Allawi's group said it will continue to negotiate with various political entities, including the Iraqi National Alliance.