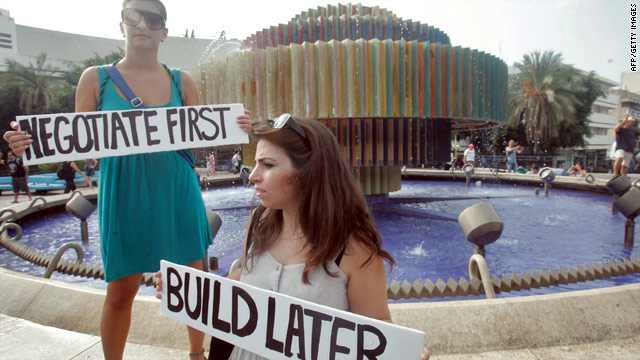 Israelis freeze for a few minutes Friday to support the continuation of a freeze on settlement construction.
STORY HIGHLIGHTS
RELATED TOPICS

New York (CNN) -- U.S. Secretary of State Hillary Clinton has added a late-day meeting with Palestinian President Mahmoud Abbas, as the United States seeks a way to avoid the collapse of Middle East peace talks over this weekend's end to an Israeli moratorium on settlement construction, the U.S. State Department announced.

The issue of settlement construction is highly controversial, and the Palestinians have said a restart by the Israelis would be reason enough to end talks.

The United States has been working to overcome the seeming impasse, angling for a way to prevent new construction in a way that would give the Israelis a position that does not appear to be caving in, which would be untenable politically back in Israel.

Various scenarios have been suggested to both sides but seem to lose momentum as fast as they are considered.

A compromise that various officials told CNN had promise Friday morning -- allowing the moratorium to be lifted but requiring all settlers planning on construction to resubmit for new licenses, thereby forestalling construction for a few more months -- is no longer considered viable by the Israelis.

Another idea under consideration Friday afternoon, according to a diplomatic source, is for Israel to continue the moratorium but allow limited construction.

A U.S. official would not discuss specific proposals but on Friday afternoon told CNN that the United States is "cautiously optimistic." However, he cautioned no deal was done.

Earlier in the day, Israeli sources said Prime Minister Benjamin Netanyahu wanted concrete assurances that Abbas would stay at the table without making the demand for an absolute halt to construction a condition to do so.

One source said Netanyahu had asked his chief negotiator, Isaac Molho, to stay in the United States to deal with the issues while the prime minister was "working the phones," the source said.

In the past day or two, Netanyahu has spoken to U.S. Vice President Joe Biden, U.S. Secretary of State Hillary Clinton and former British Prime Minster Tony Blair about working out a compromise, the Israeli government source said.

Other sources describe Clinton and George Mitchell, the U.S. special envoy for the Middle East talks, as intensely working the phones, with Mitchell holding talks with both Israeli and Palestinian negotiating teams.

"We are open to a compromise solution which is going to require flexibility and creativity from both sides," the Israeli government source said. "It could go down to the wire."