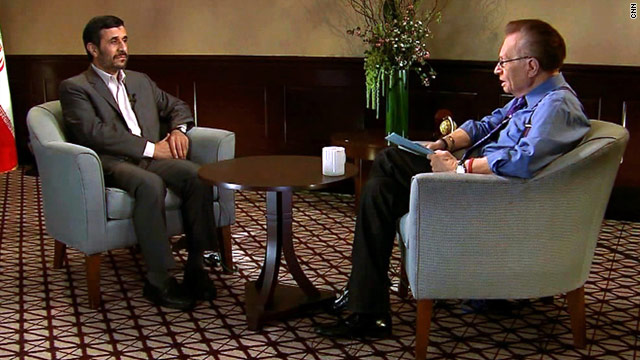 New York (CNN) -- Iranian President Mahmoud Ahmadinejad lashed out at Benjamin Netanyahu in an interview with CNN's Larry King Wednesday, calling the Israeli prime minister a "skilled killer" who "should be put on trial for killing women and children."

The Iranian president denied that international sanctions were hurting his country, and refused to commit to meeting President Obama if the opportunity arose.

Ahmadinejad also deflected questions about Iran's nuclear program, saying Iran has "no interest" in a nuclear bomb and that no one is concerned about Iran's intentions other than "the Zionist regime and some American authorities."

"We are not seeking the bomb," Ahmadinejad said.

The United States and its allies are not convinced by Iran's regular denials, and the International Atomic Energy Agency -- a United Nations body -- says it cannot confirm that Iran is not diverting nuclear materials for military purposes.

Video: Iran: Not seeking the bomb

Video: 'Justice must be served'

Video: Ahmadinejad: 'No say' in hikers

Meanwhile, Ahmadinejad insisted that "we have no interest in [a nuclear bomb] and we do not think that it is useful."

Iran normally refuses to refer to Israel by name, calling it "the Zionist regime."

Ahmadinejad is in New York for the annual meeting of the United Nations General Assembly.

He regularly challenges American presidents to talk to him in front of the world's media during the UNGA, but did not clearly commit to talking to Obama when King asked him about it.

"I think it would be very good to sit before members of other states and the media and to discuss our views -- to have an exchange at the United Nations. I think that would be very positive so that everyone could hear what we have to say and it could help resolve many problems," he said.

Ahmadinejad denied having direct influence over the case of two American hikers who have been detained in Iran for more than a year without trial.

There is a "chance" Josh Fattal and Shane Bauer could be released but a judge must make the decision, he said.

A third American who was detained with them, Sarah Shourd, was released last week.

Ahmadinejad said her release was "because of mercy, compassion and as a humanitarian gesture."

He said he had "suggested" it but that he had "no influence" over the legal process.

He spoke to King through a translator.