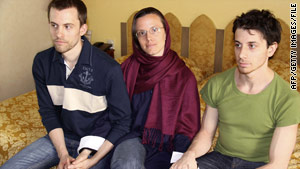 Tehran, Iran (CNN) -- Sarah Shourd, one of three American hikers detained in Iran for more than a year, could be released as early as Sunday or Monday, an Iranian lawyer representing the hikers told CNN Sunday.

"Everything is in place for the release," said lawyer Massoud Shafii, who got to see them for the first time on Sunday. "It's up to the family when to deliver the money."

The official Islamic Republic News Agency reported earlier Sunday that Shourd will be released if bail worth about $500,000 for her is submitted to the Iranian judiciary.

"Naturally she was happy, but her wish is for all three to be released together," said the lawyer, who met the Americans at Tehran's Evin prison after the prosecutor for Tehran's Revolutionary Court announced the offer to release Shourd on bail.

"I saw them and spoke to them," Shafii told CNN. "They were doing well."

Shafii said he doesn't know when the release will take place, but his guess was either Sunday or Monday.

Samantha Topping, a representative for the mothers of the hikers, said they are still taking in the news and not yet making public comments. Topping had no comment on the bail money. And Switzerland, which represents U.S. interests in the country, had little information to release Sunday.

"Technicalities demanded by the attorney general are currently under consideration by the embassy in Tehran," Swiss Ambassador Livia Lew-Agosti told CNN.

Shourd had a pre-existing gynecological problem, but her family says she now also has a lump in her breast, according to Shafii. She still could be charged, and authorities would still expect her to come back to Iran for a trial. But other foreigners who have been released on bail after imprisonment in Iran have left the country and not come back.

Iranian officials had announced Thursday that Shourd would be released on Saturday, at the end of the Islamic holy month of Ramadan. But state media announced Friday that the release had been called off because legal procedures had not yet been completed.

Then Sunday, Tehran Prosecutor General Abbas Jafari Dolatabadi announced the country's "readiness for the conditional release of one of the three U.S. citizens arrested for illegally entering the country," state-run Press TV said.

A judge decided to allow Shourd to be released on bail because of an ailment, Dolatabadi said, according to IRNA.

Shafii told CNN that "there's obviously a difference of opinion as to what to do within the government.

"Legally, the prosecutor has the final say in this matter," he said. "But I ask you, has anything about their arrests and treatment been legal so far?"

And Hossein Kamaly, an expert in Iran's legal system at Barnard College in New York, said it was unclear whether Shourd would be able to leave the country once bail is posted.

"I regret to say this has very little, if anything, to do with legal due process." Kamaly said.

Shourd, 32, Shane Bauer, 28, and Josh Fattal, 28, were detained July 31, 2009, after they allegedly strayed across an unmarked border into Iran while hiking in Iraq's Kurdistan region. Tehran has accused the three hikers of spying. Iran's intelligence minister has hinted the country may consider releasing them in exchange for the release of Iranian prisoners, according to state news outlets.

Iranian officials said Thursday that Shourd would be released this weekend. But Friday, prosecutors said the release had been "canceled" because the judicial process had not been completed.

On Saturday, Shafii said he was "upset" that Shourd's planned release had been canceled and said her family's emotions were "being abused."

"Put yourself in her mother's shoes," the attorney said. "It's been more than year and she has no idea why her daughter was arrested and what will happen to her."

Dolatabadi said authorities completed investigations on espionage charges against the three Americans over the past several days and the indictments have already been issued by the judge in charge of the case, IRNA reported.

He said the arrest warrants have been issued for Bauer and Fattal, and said Shourd will be released once she submits the bail to the judiciary, according to IRNA.

Shafii told CNN earlier that he has put in a formal request for the trio's release within the past two weeks. Shafii said he told prosecutors that a year had passed since their arrests and the government had not shown any just cause for their imprisonment. He also said that Shourd has a medical condition that requires proper care.

The hikers' families' website, freethehikers.org, said Shourd has been in solitary confinement, able to meet for only two 30-minute periods per day with Bauer, who is her fiance, and Fattal. The two men share a cell. All three Americans are graduates of the University of California, Berkeley. They have been able to telephone their families only once, on March 9.

The United States and Iran have had no diplomatic relations for three decades, and Washington is not involved in moves to free Shourd, a State Department spokesman said Sunday.

"We are in wait-and-see mode. We want all three hostages released and returned," State Department spokesman Fred Lash told CNN.

The State Department is monitoring the situation, but all diplomacy is being handled by the Swiss Embassy, he said.