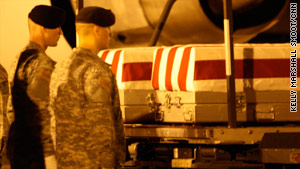 The deaths of Sgt. Phillip Jenkins and Pvt. James McClamrock are the first since the mission change for U.S. forces in Iraq.
STORY HIGHLIGHTS
RELATED TOPICS

(CNN) -- Like so many U.S. service members before them, the bodies of Sgt. Phillip Jenkins and Pvt. James McClamrock returned late Thursday to Dover Air Force Base in Delaware, the most recent deaths of the war in Iraq.

But in some ways, the differences in their deaths couldn't be more striking than the 4,400 that came before them.

The men, who died Tuesday, are the first two Americans killed in Iraq since the United States ended its combat role there after seven years.

A September 1 ceremony, held at Al Faw Palace in Baghdad, marked the conclusion of the U.S. combat mission dubbed Operation Iraqi Freedom and the transfer to the assistance mission, named Operation New Dawn.

In their new role, U.S. troops are expected to advise and assist Iraq's security forces, back Iraqi troops in counterterrorism missions and protect American civilians there during a transitional period. Some 50,000 American troops remain in Iraq.

Ironically, Jenkins and McClamrock were killed by an Iraqi soldier.

Al-Askari said Rahman got into a fight with U.S. soldiers, and then pulled his weapon and fired on them before he was fatally shot. A joint U.S.-Iraqi investigation into the incident is under way.

The bodies of Jenkins and McClamrock arrived at Dover on a cool, clear night, along with the bodies of two Marines killed in Afghanistan.

A military chaplain prayed over their transfer cases before they were unloaded from a military charter and brought before their families -- families that may not have expected to lose loved ones after America's military role was over.